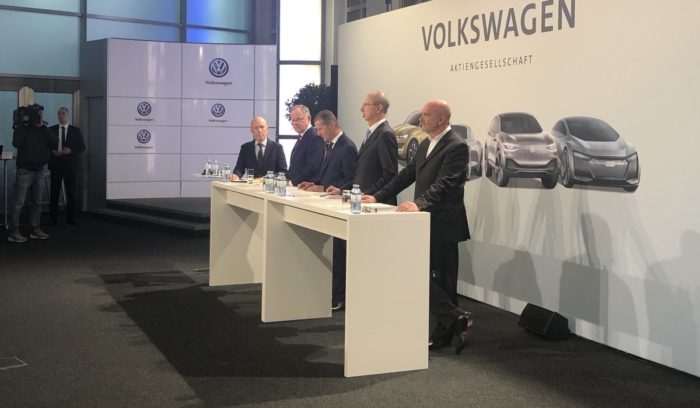 Volkswagen is also facing the national vzbv association of consumer groups, which is acting on behalf of around 470,000 owners of diesel-powered vehicles produced by the Volkswagen Group.

Presiding Judge, Michael Neef, said, as proceedings began in the Braunschweig Higher Regional Court, that the court deems the class action case admissible. However, Neef suggested that the parties should seek a settlement outside the court.

“A settlement is very difficult but possible, however, placing a value on the damage done to diesel owners was far from simple,’’ Neef said.

The association of consumer groups expressed satisfaction with the start of the proceedings in Braunschweig, located not far from the German carmaker’s headquarters in Wolfsburg.

VZBV lawyer, Ralf Stoll, said he was positively surprised that the court has conducted the case very well and “has given indications in our view that it could reach a judgement in our favour’’.

Head of VZBV, Klaus Mueller said “we believe that Volkswagen deceived them and now they must face the consequences.’’

Germany began allowing class-action lawsuits in 2018, having the Volkswagen case as the first for German court proceedings. Due to the expected massive public interest, the first hearing in the case was moved to Braunschweig’s civic hall. The carmaker argues that customers did not suffer any damage as all the cars could be driven and were safe.

Volkswagen, however, said it has reached settlements with individual customers in many cases, but in the case of the class-action, its lawyers see the settlement as barely conceivable. The company has so far spent $30 billion in dealing with the fallout of the diesel scandal in Germany and abroad, particularly in the U.S.

The former and current bosses of the car giant are also facing court cases. The scandal has not, however, put the carmaker in a financial crisis.

Volkswagen had net profits in the first half of the year of 7.2 billion euros or 8.4 percent more than in the same period in 2018.