Meet 10 Nigerian celebrities who have been to prison 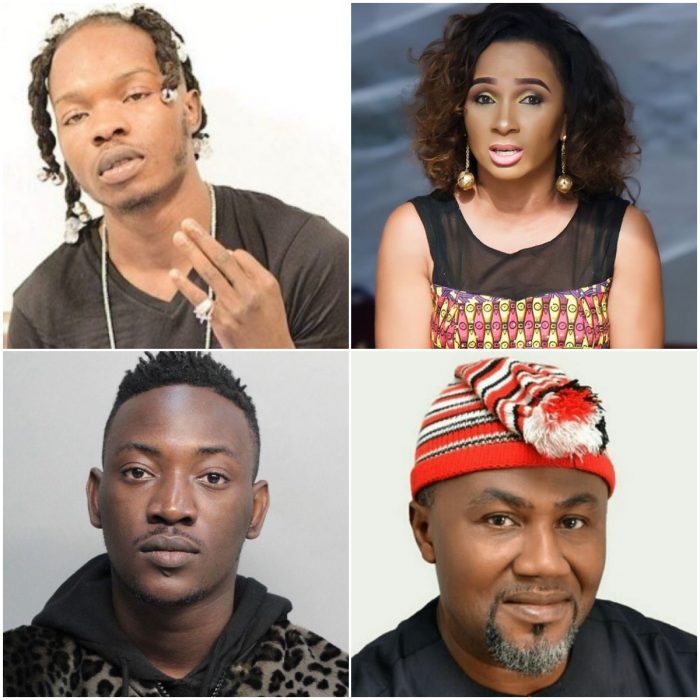 Some famous Nigerian celebrities have, at one time or the other, been in trouble with the law. A number of them have been to prison.

Below is a list of ten popular celebrities who have been to prison:

Popular musician, Johnson Oyindamola, popularly known as Dammy Krane was arrested in Florida for charges of theft, credit card scam and fraud on Friday, June 2, 2017. It was gathered that an American jet company, Tapjets, accused the singer of using five different credit cards which did not belong to him while trying to book a private jet with them. He was released from jail in Miami after meeting his bail conditions, set at $7,500, after pleading not guilty to the charges and demanded a trial by jury. The singer was assigned an attorney and was billed to appear in court on June 23, 2017. In August 2017, American courts struck out all charges including credit card forgery, armed conspiracy and grand theft filed against him.

On September 16, 2019, He was also arraigned by the Lagos State Police Command on three counts of threat to life, defamation and conduct likely to cause a breach of the peace. He pleaded not guilty to the charges. He was however granted bail in the sum of N50, 000 with one surety in like sum and case adjourned to October 11.

Rapper Babalola Falemi, popularly known as Sinzu, was arrested and jailed for two years for aggravated identity theft.
He was jailed after he pleaded guilty to aggravated identity theft which was described in the US penal code as the unlawful taking of the property of another person or business, ranging from $1000 to $500,000.
Sinzu was said to have stolen over 15 bank cards, encoded the bank numbers into blank cards, changed the PINs, and withdrew cash from ATMs. He allegedly stole $15,388 from the unsuspecting victims.
Before he went to prison, Sinzu’s music career had taken a nosedive but he was struggling to revive it.

According to the mugshot that surfaced online, he has been in jail since July 2016. Sinzu has spent two years at Ada County Jail, a medium security prison attached to the Idaho Sheriff Department.

Earlier, in 2014, Sinzu was arrested after a video was circulated, which showed him fraudulently withdraw $300 from an ATM at a supermarket. He was released from prison on 25th of March, 2018.

Azeez Adeshina Fashola is a Nigerian musician popularly known as Naira Marley who was arrested alongside four others for alleged money laundering by the Economic and Financial Crimes Commission, EFCC. The singer was arrested a day after his hit single “Am I a Yahoo boy” dropped online. He was slammed with 11- count charges.
After spending days inside Ikoyi Prison, Naira Marley was arraigned in court and granted bail for N2 million with two sureties in like sum. After his release, Marley, in a video which surfaced online said he’s been arrested 124 times in United Kingdom, where he grew up. He rose to fame in 2018 with the remix of ‘Issa goal’ which features Olamide, Falz, Simi and Lil kesh.

Nollywood actress and ex-beauty pageant, Ibinabo Fiberesima was charged for manslaughter and reckless driving after she accidentally killed a certain Giwa Suraj in 2006. Giwa Suraj was a medical doctor at the Lagos State Teaching Hospital. She was arraigned in 2009.

On March 16, 2016, Ibinabo was sacked as President of the Actors Guild of Nigeria and sentenced to a 5-year jail term by a Federal High Court sitting in Lagos. She was however granted bail in the sum of N2 million and two sureties in like sum on April 7, 2016 by a Court of Appeal in Lagos pending the determination of her appeal at the Supreme Court.

Award-winning Nollywood actor and television personality, Uche Odoputa was arrested with cocaine at the international airport in Lagos, in 2007. He was sentenced to eight months in prison. According to him, he wasn’t getting any substantial movie roles, and could not afford to feed or house himself and his family. Uche said he was open to the drug trafficking offer because he thought he could drastically change his living conditions.
He said his major regret was letting his family down and allowing his London friends take advantage of his situation by talking him into the act.

In an interview, he said, “The late Amake Igwe paid part of my legal fees, she was always in contact with me and never abandoned me.”

Nigerian actress, film producer and director, Lola Margaret was reportedly arrested in USA for wired fraud.
This report came shortly after Dammy Krane was arrested and detained in similar charges.

According to reports, the Yoruba actress had suspicious amounts of money wired into her bank account. She constantly withdrew the money thereby drawing the attention of detectives. The police took her in for further interrogations, with no official report on the alleged card fraud by the Atlanta police, but the actress’ mugshot surfaced online.

In 2018, she was released and deported back to Nigeria. Considering the gravity of her actions, the actress has decided to relocate to Ibadan from Lagos, maintaining a low profile. Lola Margaret’s career came into the limelight after she starred as the lead character in the movie, Bisola Alanu.

Embattled rapper, Neyu Godwin Nyan, widely known as Godwon, was arrested in 2009 after his involvement in the burgling of a house in the U.S. It was gathered that the rapper stole some items from the house which were eventually found in his car. His arrest was filed by a LeaAnne Klentzman for ‘burglary of a habitation’ and locked up for three years. Godwon regained his freedom in 2011.

Nigerian rapper, Raoul John Njeng-Njeng, better known as Skales was arrested alongside his erstwhile manager Osagie, for defrauding his record label, Baseline Records in 2016. The duo were accused of also diverting the funds meant for the record label. According to Baseline, Skales and his manager were making funds that weren’t documented. The rapper was eventually freed but his manager spent longer time with the police before regaining her freedom.

Kano state-based Nollywood actress, Rabi Ismaila, was convicted of murder and sentenced to death for killing her boyfriend, Mr. Auwalu, in 2002. She was sentenced to death by hanging for culpable homicide by a High Court in Kano on January 5, 2005.

In July 2011, the Supreme Court upheld the sentence of the lower courts that sentenced her to death by hanging.
Rabi Ismail, also known as Rabi Cecilia, had lured Ibrahim to a picnic at Tiga Dam, where she poisoned him and pushed him into the dam. Rabi escaped from Hadejia Prison on December 16, 2011. She was later rearrested in 2017.

Taiwo Akinwande, popularly known as Yetunde Wunmi, is one of the most notable actresses in the Yoruba movie industry. Wunmi was arrested in October 2006 by officials of the National Drug Law Enforcement Agency (NDLEA) for cocaine trafficking. She was arrested on her way to London as she was about to board a Virgin Atlantic plane at the Murtala Muhammed International Airport (MMIA), Ikeja, Lagos, when eagle-eyed NDLEA officials caught her.

Justice Ahmed Mohammed of the Federal High Court, Lagos sentenced her to three years imprisonment fer she admitted carrying out the act.