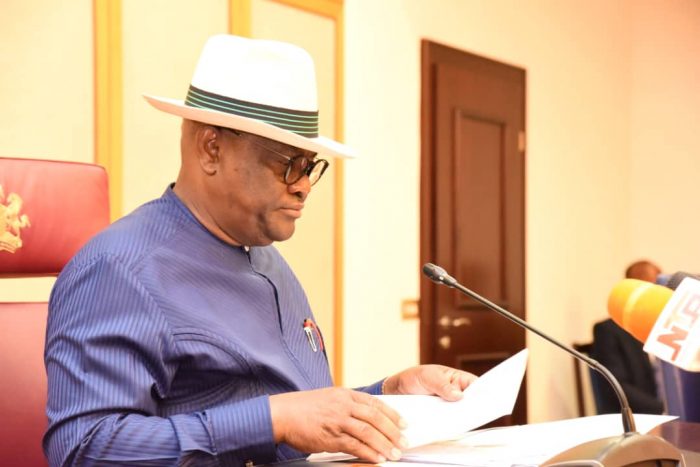 He said: “I am delighted to inform you that the Rivers State Government has fully acquired Shell Petroleum Development Company of Nigeria (SPDC) 45% interest in Oil Mining Lease (OML) 11 situated in Ejama Ebubu community in Eleme Local Government Area and the adjoining Ogoni and other communities of Rivers State”.

In a state Broadcast on Monday at the Government House, Port Harcourt, Governor Wike in his address titled: “WE WILL CONTINUE TO ADVANCE THE STATE’S INTEREST,SECURITY AND PROSPERITY OF ALL”, said his administration will always advance the best interest of Rivers State.

Governor Wike explained the Background for the acquisition of OML 11, was is premised on Court Judgments, which have been registered in the United Kingdom and Nigeria for enforcement.

He said: “This fresh case commenced in 2001 passed through four different justices of that Court arising from twists and turns associated with opposed litigation, until it was disposed of about 10 years after in June 2010 by Buba J. (the fifth judge to preside over the matter).

“SPDC and its parent companies appealed the judgment at the Court of Appeal in 2010, which again suffered the twists and turns passing through six different panels comprising three justices each between 2010 and 2017 before it was finally disposed of by the panel of that Court led by Gumel JCA of the Port Harcourt Division. The appeal was dismissed.

“SPDC and its parent companies took out a further appeal to the Supreme Court of Nigeria in 2017, which appeal was considered and dismissed by that Court in a judgment read by Hon. Justice B. Akaahs, JSC delivering a lead judgment in a unanimous decision. After losing at the High Court, SPDC gave the successful Ejama Ebubu Plaintiffs a Bond Guarantee stipulating that First Bank of Nigerian Limited would pay them the value of the Judgment debt and interests thereon in the event that SPDC’s appeal to the Court of Appeal fails at that Court. The original Bank Guarantee is still with the Community.

“When SPDC’s appeal failed at the Court of Appeal, Shell instructed the Bank to dishonour their guarantee, which did and gave rise to a series of six different litigation in various Courts against First Bank and the Central Bank of Nigeria. SPDC’s excuse was that they had lodged an appeal at the Supreme Court of Nigeria. The enforcement cases had been to Owerri, Abuja, Lagos, etc. in six different lawsuits. On the 11th of January 2019, Shell’s appeal was dismissed at the Supreme Court of Nigeria.

“The judgments of the High Court, the Court of Appeal and the Supreme Court were registered in the United Kingdom for enforcement over there against SPDC parent companies domiciled outside Nigeria’s shores.”

On the enforcement of the judgment in Nigeria, Governor Wike said:

“The Ejama Ebubu community commenced enforcement by domiciling the judgment in the State High Court and levying execution on SPDC moveable’s in their Industrial Area in Port Harcourt; Those chattels were attached on the ground but not removed; SPDC invited the community and offered them N7 billion as against the judgment debt of N194 billion, which the community refused to accept; the community approached the court for and order granting them leave to sell SPDC’s immovable property comprised in OML 11 and their kidney Island support base in Port Harcourt”.

Governor Wike said upon the advertisement of the said immovable assets for auction, the Honourable Attorney General and Commissioner for Justice of Rivers State alerted the Government of the State.

He explained the reasons why the State Government resolved to purchase OML 11.

He said” “That the impact is still there and un-remedied since 1970 as admitted by SPDC vide letters they wrote seeking to clean the spill in 2006 while the case was at the trial Court;

“That the Rivers State has suffered the worst impact of environmental degradation resulting from oil related operations; that the very difficult swamp and mischievous waterlogged terrain of the Rivers State has impeded development as a result of increased construction costs on the near and non-existent infrastructures and attendant rapid decay of the little we have been able to achieve as a result of oil related acid rain and black sooth enveloping the State;

“That these phenomenal degradation and impoverishment had continued with the decline of revenue and inflation, lack of employment of well-educated Rivers State youths, idleness and restiveness arising from want; that SPDC is said to have paid the sum of USD 2,000,000 (two million United States Dollars) only for the renewal of their operatorship and interest in the said OML 11 to the Federal Ministry of Petroleum Resources;

“That for the past 25 years, the rich oil potentials of OML 11 have remained untapped following the hanging of the world-renown Ogoni poet and environmental activist, Mr. Ken Saro Wiwa and the Ogoni 9 as well as the unfortunate mob lynching and death of four prominent Ogoni citizens, one of whom was the Secretary of Government of the Rivers State and another, a Commissioner under the tenure of Lt. Col. Dauda Musa Komo as Governor of Rivers State; that it has become unlikely that for peace and security, the people of Ogoni in the Rivers Stat will welcome SPDC on their land forming part of OML 11.”