Lapid announces readiness to give up PM-rotation deal 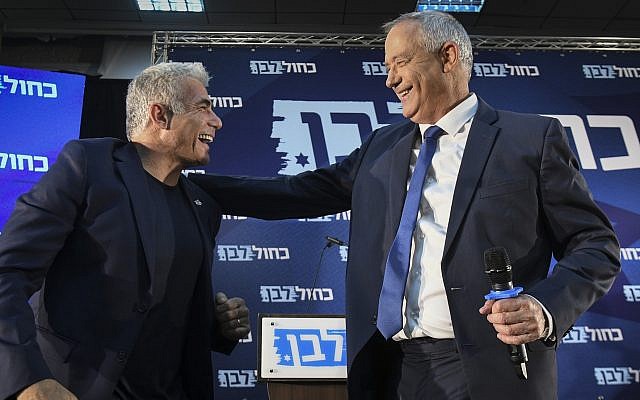 Blue and White No. 2, Yair Lapid, has declared his readiness to give up on his rotation deal with party leader Benny Gantz whereby they would share the premiership if that were a prerequisite for joining a unity government with the Likud party.

Lapid said this on Thursday while speaking at the Blue and White faction meeting in the Knesset before the swearing-in ceremony for the 22nd Knesset.

He said, “For the sake of a unity government I’m forgoing the rotation. It’s far more important to me that there be unity in the country; that there won’t be another election; that this country begins a healing process, mends the wounds, changes the national priorities.”

Accusing Prime Minister Benjamin Netanyahu of “trying everything to drag us to elections,” Lapid said, “One man with three indictments stands between us and a national unity government.”

“In that government there will be a rotation. Benny Gantz will be prime minister for the first two years. There’s no other option. We’re the largest party and Netanyahu is in the midst of his legal hearings,” he said. “We won’t sit in a government with a prime minister who has been indicted or is facing such serious charges.”

Despite his legal woes — he is facing pending corruption charges in three cases — Netanyahu was tasked by Rivlin last week with trying to form a government based on the strength of his pact with right-wing and ultra-Orthodox parties to negotiate as a bloc of 55 MKs, and was given 28 days to do so.

Gantz heads a bloc of 54 MKs from the center, left and Arab parties, but the 10 Arab MKs in that group would not join a Gantz-led coalition. Neither candidate has a clear path to a 61-strong Knesset majority without the other.

In his comments Thursday, Lapid said, “If in two years Netanyahu will complete the legal process and be cleared of all charges then there’s no problem, he can come back. I hope for him that’s what happens.”

He added, “There won’t be a rotation with three people. That’s not serious. Running a country is a serious matter.”

The Likud party had accused Lapid of preventing any progress in unity talks with Blue and White due to an ostensible unwillingness to give up on sharing the premiership.

“Blue and White’s negotiating team canceled the meeting because Lapid caused Gantz to fold over the holiday, with the purpose of dragging the country to elections.

Lapid doesn’t want a rotation between Netanyahu and Gantz but rather between him and Gantz,” a Likud statement said Wednesday after Blue and White canceled scheduled talks between the two parties.

Likud was referring to the agreement between Gantz and Lapid, which would have seen the latter take over as prime minister after two years and eight months if Blue and White formed the next government.

Blue and White have refrained from publicly commenting on the rotation deal since the coalition talks started.

Netanyahu had been scheduled to meet with Gantz Wednesday evening, but the centrist party canceled the summit late Tuesday, saying there were no signs that the premier was truly interested in reaching a power-sharing compromise.

Likud and Blue and White have accused each other of intransigence in the coalition talks and claimed that the other side was pushing the country toward an unprecedented third election in under a year.

Rivlin had suggested a unity government in which power would be equally divided and Netanyahu and Gantz would each serve two years as prime minister.

Rivlin implied, but did not specify, that Netanyahu would take an open-ended leave of absence if or when he is indicted in one or more of the probes in which he faces charges.

Under the arrangement set out by Rivlin, Gantz, as “interim prime minister” in such a scenario, would enjoy all prime ministerial authority.

But the two parties have been unable to agree on who would be prime minister first under such an arrangement.

If nothing changes in the party’s positions, Netanyahu is now expected to tell Rivlin that he is unable to form a majority government. This will likely lead to Gantz being given a chance to form a coalition.