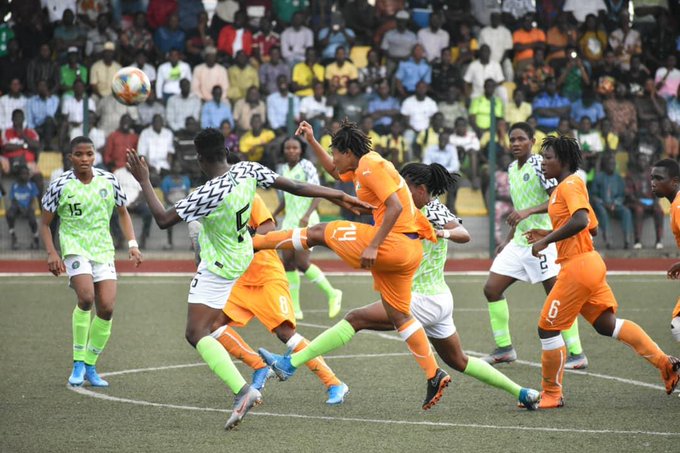 Nigeria’s Super Falcons have failed to qualify for the 2020 Tokyo Olympics football tournament, having crashed to Cote d’Ivoire at the Agege Stadium, Lagos, Southwest Nigeria.

The Super Falcons played out a 0-0 draw with Cote d’Ivoire in the first leg in Abidjan and played 1-1 draw in Nigeria, on Monday, thus, losing out on away goal rule.

This the third successive edition of the Olympic Games that the Super Falcons will be failing to qualify for having also missed out on the London 2012 and Rio Olympics in 2016.

In Monday’s tie, Christopher Danjuma made three changes to the side that started at Parc des Sports, Treichville, with Gift Monday, Rasheedat Ajibade and Ngozi Ebere earning starting places.

However, it was the visitors that scored first as Kapho Nina gave Cote d’Ivoire the lead in the 12th minute.

While the Super Falcons expectedly mounted the pressure to get an equalizer, they almost conceded a second goal in the 32nd minute as Ange N’Guessan came close to doubling the lead for the Ivorians.

However, two minutes later, captain Asisat Oshola did get the much sought after equalizer for Nigeria when she raced again through the defence of the Ivorians before firing past the goalkeeper to level for the Super Falcons.

With the first half ending 1-1, the Super Falcons had all the work to do in the second half but despite piling the pressure on the visitors they could not convert the chances they created, Premium Times reports.