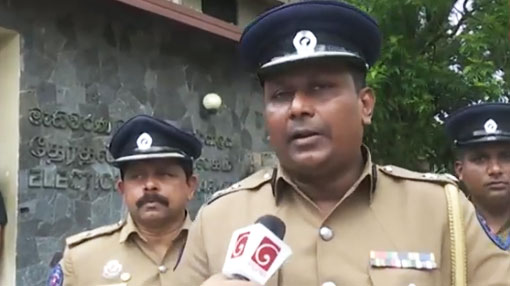 Sri Lanka’s Elections Commission on Tuesday said it had banned public parades, posters, banners and cutouts in support of the presidential candidates who are contesting next month’s presidential polls.

Police spokesperson, Ruwa Gunasekara, said as far as the laws guiding the conduct of the elections were concerned, the displaying of election-related posters, banners, cut-outs, vehicle parades, and public processions had been banned.

This, Gunasekara said, would subsist until the presidential polls take place on Nov. 16, and security personnel would be deployed across the island to arrest violators. Gunasekara added that police personnel would continue to monitor CCTV footage to identify the violators.

A record number of 35 candidates will run for the presidency in Sri Lanka’s presidential polls in November, the highest number in the island’s history.

The Elections Commissioner, Mahinda Deshapriya, however, urged candidates, their political parties and supporters to abide by elections laws and ensure a free and fair poll.

Sri Lanka’s presidential polls, scheduled for November, is just nearly two months before the end of the incumbent’s term.