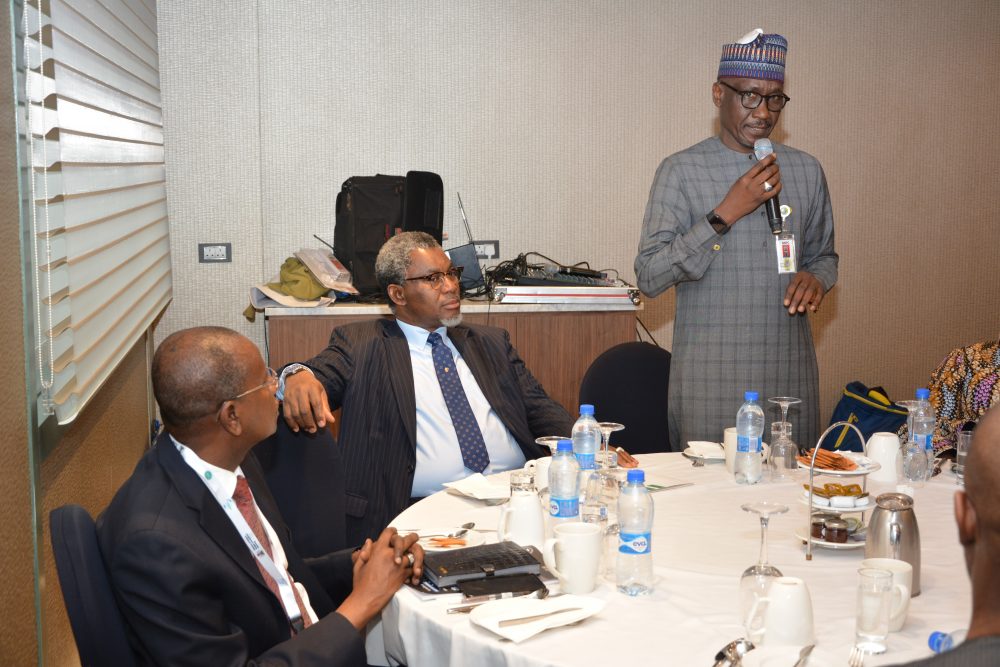 The Group Managing Director of the Nigerian National Petroleum Corporation (NNPC), Mallam Mele Kyari, making a presentation at the 25th anniversary of the Nigerian Economic Summit Group (NESG) in Abuja

The Nigerian National Petroleum Corporation (NNPC) has expressed the determination of the Federal Government to work with the National Assembly and all other stakeholders to pass the long awaited petroleum legislation considered to be capable of providing a win-win scenario for all players in the Oil and Gas Industry.

Group Managing Director of the NNPC, Mallam Mele Kyari, made this commitment while making a presentation at the 25th anniversary edition of the Nigerian Economic Summit Group (NESG) with the theme: ‘Rethinking the Future of Extractives’ in Abuja on Tuesday.

As contained in a press statement signed by NNPC Acting Group General Manager, Group Public Affairs Division, Mr. Samson Makoji,  Mallam Kyari explained that for Nigeria to make the most of the Oil and Gas Industry, passage of the petroleum legislation was imperative as the bill has the prospect to guarantee a robust fiscal regime, protect the environment, ensure development of host communities, ensure proper alignment with other sectors and encourage investors to expand their investments in Nigeria.

“Getting the petroleum legislation passed is the right thing to do because investors will not invest their money if they are not sure of how they are going to get their investment back and what benefits can they get from their investment and how stable the investment climate is. We must resolve the petroleum legislation and am aware that this administration is working assiduously to get the law passed within the shortest frame of time,” Mallam Kyari assured.

He stated that the petroleum law, when passed, would create a robust fiscal regime that would make the Oil and Gas Industry competitive, even as he expressed optimism that International Oil Companies (IOCs) in the country would be spurred to invest more in the petroleum sector after the passage of the bill.

Mallam Kyari assured that before the petroleum legislation is passed, a lot of fora would be organized to harvest inputs from relevant stakeholders, saying that the proposed law would be aligned to best practices and it would be a win-win for all.

He added that the Oil and Gas Industry was the enabler of the economy and revenues from the Industry largely fund the nation’s budget, saying that the NNPC was committed to the expansion of the oil and gas infrastructure corridors to increase the revenue streams available to the government.

The NNPC helmsman averred that the State Oil Firm was deploying several commercial solutions to leap frog the nation’s economy, stressing that the goal was to create multifaceted job opportunities for Nigerians.

Mallam Kyari assured that the NNPC was working round the clock to ensure energy security for the nation, revealing that the Abuja-Kaduna-Kano pipeline, dubbed the AKK, would be delivered to promote the growth of petrochemical companies in the country.

He also assured that the domestic gas obligation would be delivered, stating that there are a lot of ongoing gas projects that upon completion would deliver huge value for the national economy.

The NNPC GMD assured investors that the Federal Government had put in place efficient security strategies to mitigate security concerns around oil and gas installations in the country.

Earlier, the Minister of Mines and Steel Development, Mr. Olamilekan Adegbite, said efforts were on to return Nigeria to a mining destination through a digitization process that would encourage investors to participate in the mining sector in a very transparent manner.

In a presentation at the event, a partner of PricewaterhouseCoopers, Pedro Omontuemhen, called for collaborative efforts between the various tiers of government for Nigeria to make the most of the extractive industries in the country.