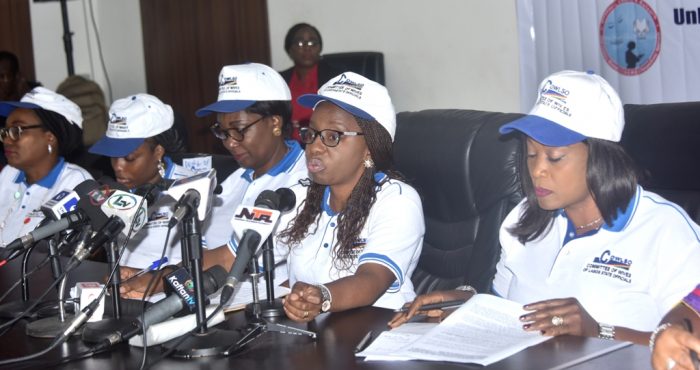 The conference holds between Tuesday October 22 and Thursday, October 24.on Tuesday.

Wife of the Lagos State Governor, Ibijoke Sanwo-Olu disclosed this on Friday at a press conference to announce the proposed conference, held in Alausa, Ikeja, Lagos, Southwest Nigeria.

She said as against 2,500 participants last year, over 3,000 active participants were expected at this year’s conference.

The theme of this year’s conference is: “Unlearn, Learn and Relearn: 21st Century Women’s T.H.E.M.E.S Perspectives/Approach.”

According to her, this year’s theme was carefully selected in line with the vision and aspiration of the present administration in Lagos State to bring about greater Lagos of ‘our dreams.’

Sanwo-Olu explained that the theme was designed to re-orientate the people to do away with wrong habits, to begin to do the right thing by learning some new ideas, saying that “we are talking of totally overhauling of the people, to keep on teaching and re-orientating the people”.

The First Lady added that eminent Nigerians and outstanding professionals had been lined up to help women come to terms with how best they could key into the emerging opportunities being provided by the government of the day in Lagos.

Other activities are: a visit by the COWLSO team to the children and post natal wards of the Lagos State University Teaching hospital, LASUTH, Ikeja and awareness walk on Saturday.

She said the conference would feature lectures, dinner/gala night, inspirational woman of the year award, certificate of appreciation, among others.

She added that there would be raffle draw at the gala night of the conference with opportunities for women to win mouth-watering prizes, including a house, brand new cars, first class return ticket, deep freezers, among others, while buses would be available to convey participants from the venue to Lekki-Ajah, Oshodi-Mile 2, Agege-Iyana Ipaja, Ojodu Berger, Yaba, and Ojota/Ketu.

She also seized the opportunity to celebrate the International Day of the Girl-Child which is marked across the globe on every October 11, assuring that the present administration in the state would spare no effort to frontally address all issues affecting the girl-child with the required vigour, zestfulness and determination.

On her plans for women in the State, the First Lady said concerted efforts would be geared towards medical assistance, financial assistance to students especially through the ‘Adopt A Student Project,’ creating more