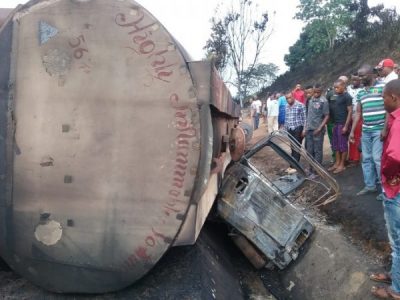 Fear of Petroleum product tanker explosion is very palpable as scores of residents in Obio-Akpor Local Government Area, a suburb of Port Harcourt, the Rivers State capital, rushed to scoop spilled diesel from a Conoil Plc tanker laden with 33,000 litres of product suspected to be diesel that fell and overturned on Thursday at the Obiri-Ikwerre bridge.

The tanker somersaulted as it tried to negotiate the bend on top of the bridge along Nkpolu axis of the East-West Road.

Scores of people immediately trooped to the scene with jerrycans, kegs and funnels to scope the leaking diesel, leading to heavy gridlock on the road.

Policemen mobilized to the scene to disperse the crowd have met brick walls.

Residents spoken to said they were scared of their lives if urgent action was not taken to contain the spill immediately and condone off the scene.

An eyewitness, a commercial taxi driver, who gave his name as Ike Maduka regretted that despite inherent danger associated with scooping such highly inflammable product and the unpalatable experiences of the past, people still rushed to engage in such dangerous venture.