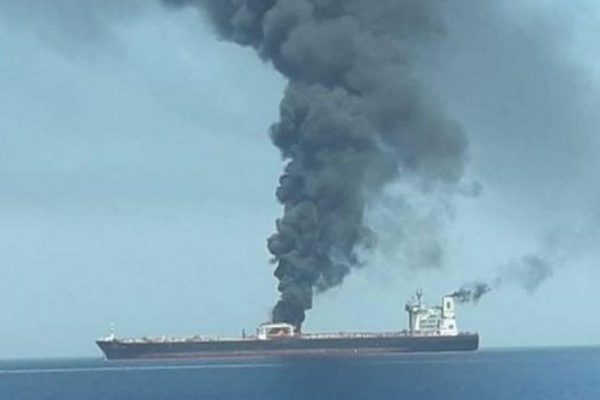 A massive fire broke out at an Iranian oil tanker after an explosion occurred on Friday near the Saudi port city of Jeddah, resulting in an oil spill in the Red Sea, according to Iranian state TV.

The tanker is currently in a stable condition, the statement added.

The US Navy’s 5th Fleet, which oversees the region, has not commented on the reports, the statesman.com reported.

The reported explosion comes after the US alleged in the past months that Iran was responsible for attacks on oil tankers near the Strait of Hormuz, at the mouth of the Persian Gulf, something denied by Tehran.

Last month, fire broke out at two facilities of Saudi Aramco, Saudi Arabia’s state-run oil producer after they were reportedly hit by drones.

The attack was the latest part of a series of attacks on oil infrastructure, including the sabotage of pumping stations along the East-West pipeline, and attacks on oil tankers off Fujairah and close to the Strait of Hormuz.

The United States had accused Iran for the blasts at the Saudi oil infrastructure,

However, Tehran sent Washington a diplomatic note denying any role in drone attacks on Saudi Aramco facilities. Also, it warned that it would respond to any action against it.

The missile attack on Iranian oil tanker came a day after Iranian Foreign Minister Mohammad Javad Zarif called for the regional states’ cooperation to establish security, peace and stability in the region.

“We all have grievances about the past. Iran, after 8 years of regionally-financed aggression and 40 years of foreign-sponsored attacks, has much to complain about,” Zarif wrote on his twitter page on Thursday.

“But as Rumi wrote 800 years ago: Out beyond ideas of wrongdoing and right-doing there is a field. I’ll meet you there,” he added.

Zarif made the remarks after his earlier tweet which referred to his writing of an opinion editorial on HOPE (Hormuz Peace Endeavor) in the Financial Times newspaper.

“I invite my colleagues in the leaderships of other regional states, and in the academic and diplomatic communities, to join us in forging a blueprint for peace, security, stability and prosperity,” a part of the OpEd said.