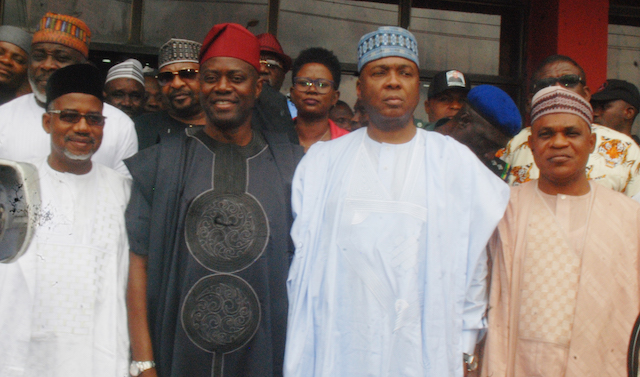 The Peoples Democratic Party (PDP) has inaugurated a national reconciliation committee and campaign councils for Kogi and Bayelsa governorship elections, scheduled for Nov. 16.

The reconciliation committee is headed by a former Senate President, Sen. Bukola Saraki.

The PDP National Chairman, Mr Uche Secondus, while inaugurating the committee and the councils, urged the reconciliation committee to work assiduously to reconcile all aggrieved members in the two states and bring them back to the party.

He said that the party should not go into in both Kogi and Bayelsa governorship elections as a divided house.

Secondus, who expressed confidence in the members of the campaign councils, advised them to work for the victory of the party in the two states.

He said that the campaign councils have the task of ensuring that the electoral desires of the people of the two states were realised.

“I charge you to make sure that you bring the best of our programme for the two states during your campaign.

“Preach one man, one vote; obey all the rules and the laws of the land, because we are a party that believe in the rule of law.

“Make sure that we win in Bayelsa and Kogi states,” Secondus said, adding that the party had credible and best candidates for the two states.

He said that given the achievements of Gov. Seriake Dickson in the last eight years in Bayelsa and the current situation in Kogi, the elections in the two states would be smooth contest for PDP.

The PDP chairman, however, said that the information available to the party showed that the All Progressives Congress (APC) was planning to rig the elections.

Secondus advised INEC to be neutral in the conduct of the elections to ensure that they were free, fair and credible.

He called on the international community and all lovers of democracy to show more than passing interest in the forthcoming elections in the two states.

Secondus also advised President Muhammadu Buhari and the APC to enforce peace and the rule of law in the country.

In his response, Saraki said that his committee would do its best to reconcile all aggrieved members in the two states.

Saraki said that the driving message was that a government headed by PDP was better than that headed by another party.

Also speaking, Gov. Mohammed said that the issue of reconciliation in Bayelsa was half done, as former President Goodluck Jonathan had directed him to accept the responsibility.

“I am taking this responsibility with the seriousness and energy that it deserves. Politics is not a joke.

On his part, Makinde promised that his committee would run issue-based campaigns in the Kogi State and do the party proud.