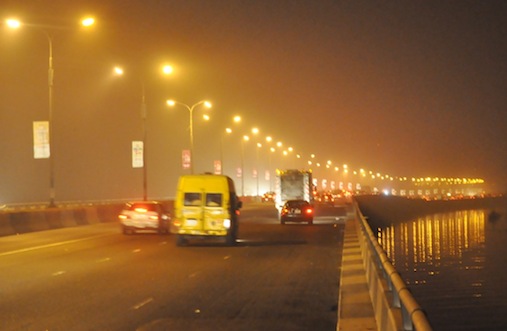 The Third Mainland Bridge in Lagos is the busiest road in Nigeria, Minister of Works and Housing, Babatunde Raji Fashola said.

He did not give specifics, but said the evaluation came after his ministry undertook a daily traffic count in the country.

Fashola spoke on Thursday while defending the budget of his ministry before the Committee of Works of the House of Representatives.

According to him, the result of the count gives credence to the argument that toll plaza should be returned to Nigerian roads.

Last week, while justifying the return of tollgates on the highways, Fashola had also identified three traffic-heavy routes in the country. They are Lagos-Ibadan, Abuja-Kano amd Abuja-Lokoja.

“The two or three heavy routes are the Lagos-Ibadan, Abuja-Kano, Abuja-Lokoja. Now, on Lagos-Ibadan Expressway, the heaviest traffic you will find is between Lagos and Shagamu. It is about 40,000 vehicles. After Shagamu, heading to Ibadan, it drops to about 20,000. So, most of it has gone eastward, going towards Ondo and Ore and by the time you get to Benin, the number significantly drops.

“It goes up again at the confluence where they are heading towards the Niger. So, you can see that it is not a static 50,000 all the way. Same thing with Abuja-Kano-Zaria. After Kaduna, the traffic significantly drops. It is about 40,000 there too but after Kaduna, it begins to drop; by the time you get to Zaria, if you have driven to that road before, by the time you are driving between Zaria and Kaduna, you see how thin the recurring number of vehicles you meet is and as you begin to head closer between Kaduna and Abuja, the number of vehicles begins to increase.

“So, I think it is important to have that at the back of your mind; not all roads have those traffic counts. I also want to let you know that what we are doing is not accidental. We are being deliberate and methodical- collecting information to know what to do with which place and what.”

On private sector involvement in funding road projects across the country, Fashola said the Sukuk project was a private intervention as well as the PIDF project through the Sovereign Wealth Fund.