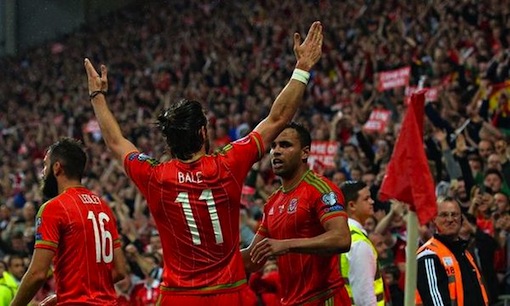 Wales star Gareth Bale admitted he is relieved to be available to face Croatia in Sunday’s crucial Euro 2020 qualifier after escaping a red card in Slovakia.

Bale had already been booked when he fouled Slovakia defender Milan Skriniar in the closing stages of the 1-1 draw in Trnava on Thursday.

The Real Madrid forward could have been shown a red card that would have ruled him out of the Croatia clash in Cardiff.

But he was also hurt in the collision and spent a couple of minutes needing treatment before play resumed with no punishment.

“I’m fit and I’m fine, it was just a knock on the knee and a bit of ice has sorted that out,” Bale said on Saturday.

“I was more worried about getting sent off to be honest. I was just happy to get away with that one!

“But saying that, I didn’t think the first one deserved a yellow, so maybe it evened itself out.”

Wales, who trail Group E leaders Croatia by six points and are three adrift of second-placed Slovakia, with a game in hand on both, finish their campaign with November games against Azerbaijan and Hungary.

“I can’t make too many silly tackles, I have to be mindful of that,” Bale said.

“I don’t want to miss any games for Wales, especially at the crunch time of the group.

“So I have to be clever with what I’m doing, but maybe expect someone’s going to rile me to get me suspended.

“I’m experienced enough to get through the period without picking up another booking.”

Wales have failed to win in five previous encounters with Croatia and Bale would love to end that run against his Real team-mate Luka Modric.

“We know each quite well, as we’ve played together for a long time in Tottenham and Real Madrid, and it would be nice to get one over on him finally,” Bale said.

“We’ve not spoken yet, maybe there will be a little message later on.

“They’ve beaten us a few times in the past, but it’s always been a tight game between us.

“We know what a great team they are. They had a great World Cup and shown year after year how good they are.

“But playing at home gives us an advantage and we’ve had some great results against some big teams in our stadium.”

Wales will make a late decision on Aaron Ramsey’s fitness after the Juventus midfielder, who is yet to feature in the Euro 2020 qualifying campaign, missed the Slovakia game while he recovers from a thigh problem.

“We have not ruled Aaron out. He’s on a different schedule, he didn’t travel to Slovakia with the team and stayed back with the physio,” Wales manager Ryan Giggs said.

“So we’re just giving him all the time we can and (will) see how it is in the morning (on Sunday).”