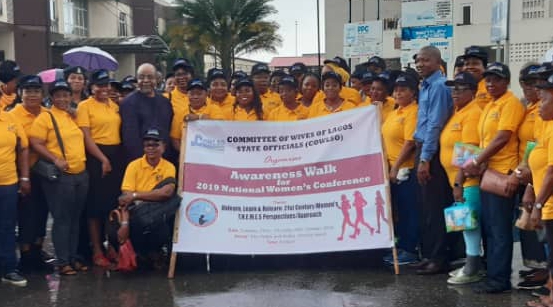 Members of the Committee of Wives of Lagos State Officials (COWLSO) on a visit to the Lagos State University Teaching Hospital (LASUTH) on Saturday.

Sanwo-Olu, who was accompanied by members of the Committee of Wives of Lagos State Officials (COWLSO), said that the fund was to compliment the free healthcare services for children in the state.

The governor’s wife, who is the Chairperson of COWLSO, said that the endowment fund would bridge the gaps and reduce challenges in the health sector, especially as it affected children.

Sanwo-Olu and the others distributed gift items to patients at the neo-natal and post-natal wards as part of activities heralding the 19th Annual National Women Conference of the association.

According to her, there was need to invest in the medical services to deliver good healthcare to the people of Lagos state.

She called on private organisations to partner with the group in achieving the best in health delivery.

”We have identified the Ayinke House; we can see that it was built for a purpose. It has 170 beds and the doctors and nurses are willing to do their work. So, it is left for the patients now to come here.

”You don’t need to go abroad and have your baby; you can come here and have the same feel that you have abroad,” Sanwo-Olu said.

The Chief Medical Director of LASUTH, Prof. Adetokunbo Fabamwo, commended the First Lady and COWLSO members for the endowment fund.

Fabamwo said that the newly completed Ayinke House, a 170-bed facility for delivery of babies, was now ready for use and urged pregnant mothers to make use of it.

He called on wealthy individuals and corporate organisations to assist the state government in achieving its healthcare objectives.

”The project the first lady just talked about is an endowment fund for babies. The government has a free health policy for zero to 12; it has been on since 1999.

”But we need to assist government. So we want to appeal to high net worth individuals and corporate organisations to put funds in the endowment.

”This is because some of those children need cancer care and cancer drugs are very expensive.

“Government may not be able to provide everything. So that’s what the whole idea of the endowment fund is about,” the CMD said.