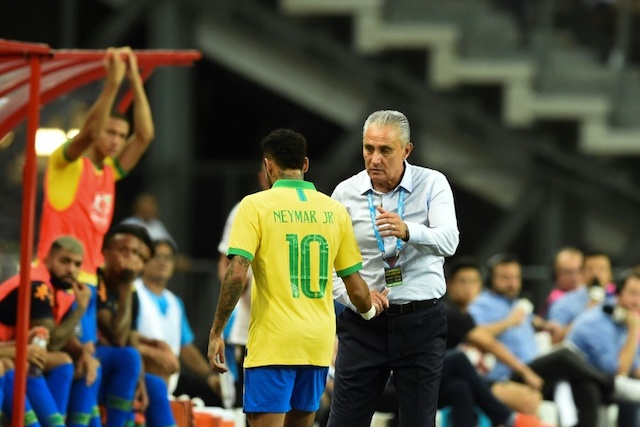 Neymar leaving the field in Singapore

Paris Saint-Germain forward Neymar suffered an apparent injury on Sunday which forced him out of Brazil’s friendly against Nigeria in Singapore.

He limped off the field at the Singapore National Stadium in the 13th minute and was replaced by Bayern Munich’s Philippe Coutinho.

The 27-year-old, who played the full 90 minutes against Senegal on Thursday, clutched his hamstring after eight minutes and was replaced by Philippe Coutinho shortly after.

Neymar, who was playing his 101st international, is now a doubt for PSG’s Champions League meeting with Club Brugge on October 22. He has missed the first two rounds because of a UEFA suspension.

He was injured while on national duty back in June when he hurt an ankle in a friendly against Qatar. It ruled him out of the Copa America which Brazil went on to win.

If the injury was bad for Neymar then the result was disappointing for Brazil — it is their fourth successive match without a win.

Their previous three outings since winning the Copa America had yielded draws against Colombia and Senegal and a defeat by Peru.

Even when Neymar was on the pitch, the Nigerians were causing problems with Brazil goalkeeper Ederson at full stretch to keep out Victor Osimhen.

Gabriel Jesus went close for Brazil but it was the Super Eagles who took the lead in the 35th minute when Moses Simon slipped the ball to Joe Aribo who got the better of Marquinhos before firing home.

Brazil showed more invention in the second half and levelled three minutes after the break. Marquinhos’ header came back off the bar but Casemiro was on hand to stab the ball across the line.

Jesus and Coutinho both had chances to wrap up the win for Brazil but Nigeria held firm for the draw.