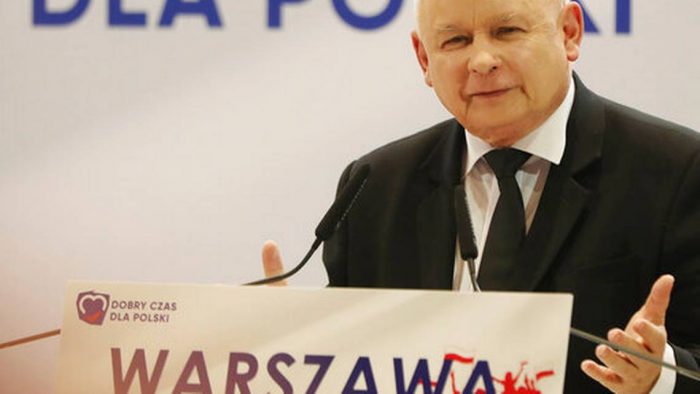 In this photo taken Tuesday Oct. 8, 2019 Poland's ruling right-wing party leader Jaroslaw Kaczynski speaks at a convention in Warsaw, Poland. ahead of Sunday parliamentary election in which his Law and Justice party is hoping to win a second term in power. CZAREK SOKOLOWSKI AP PHOTO

Poles, the Polish people of Central Europe, are on Sunday going to polls to elect a new parliament as the governing socially conservative Law and Justice party (PiS) seeks to maintain its outright majority in the lower house while opposition parties hope for an upset and a broad anti-PiS government.

Poles select 460 lawmakers for the Sejm, the lower house and main legislative body, as well as 100 members of the Senate, an oversight and review chamber.

According to reports by dpa news, PiS was the clear leader in opinion polls ahead of the Sunday ballot and is expected to win between 40 and 49 per cent of the vote, which could potentially give it an outright majority in the lower house.

The main opposition forces – the centrist Civic Coalition (KO), the Democratic Left Alliance (SLD) and the Christian Democrat agrarian Polish People’s Party (PSL) – hope in turn that their combined support can top that of PiS, allowing them to form a coalition government.

The common denominator of the opposition is a pro-EU stance and a pledge to undo controversial broad institutional reforms introduced by PiS in the last four years, including in the judiciary, which put the country at loggerheads with the European Commission.

Polling stations open at 7 am (0500 GMT) and are scheduled to close at 9 pm, when the first exit polls are expected to be published.

Five major political forces have been registered to participate in Poland’s parliamentary election scheduled for Sunday.

1) Law and Justice (PiS) is a social conservative party, in power since 2015. Its candidates include members of smaller right-wing parties United Poland (Solidarna Polska) and Agreement (Porozumienie).

The social conservative party has been in power since 2015. Its candidates include members of smaller right-wing parties United Poland (Solidarna Polska) and Agreement (Porozumienie).

PiS focuses on social benefits and presents itself as the defender of traditional Catholic values against what it calls “LGBT ideology.”

It promises to reduce labour costs and introduce state-funded cash bonuses for employees, an attempt to differentiate itself from the PiS social spending programmes where being employed is not a prerequisite. But it is also saying that those programmes will remain.

3) Democratic Left Alliance (SLD) is a left wing bloc. While running as single party, and subject to a 5 per cent electoral threshold, SLD is in fact an electoral alliance of three left-wing groupings: SLD, Spring (Wiosna) and Left Together (Lewica Razem).

It proposes to speed up the country’s energy transformation into renewable energy and strengthen environmental protection.

PSL’s main proposals include abolishing the income tax on pensions, making social insurance optional for private entrepreneurs and subsidizing down payments on apartments for families.

5) Confederation Freedom and Independence (Konfederacja) is a nationalist, right-wing party with radical libertarian views, presenting itself as the only anti-establishment choice.

It proposes abolishing the income tax in its current form and making social insurance optional for each citizen, while radically reducing state spending.