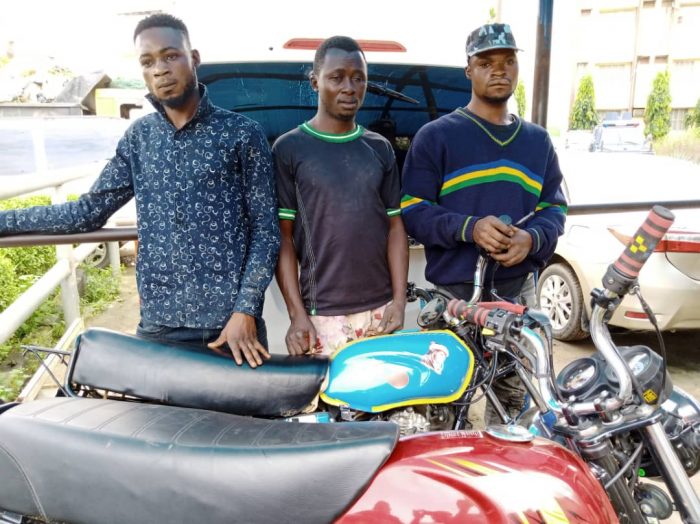 The suspects, Emmanuel Michael, 24, who rode on a motorcyle, in company of two other accomplices; Moses Ogeh, 27 and Ojonugwa Ojomeje, 29, were arrested in Ita-Maga area of Ikorodu after hijacking a motor bike popularly called ‘okada’ from a cyclist while impersonating police officers.

Two of the suspects: Ojomeje and Ogeh were caught in MOPOL vest and police vest and fez cap while trying to escape after collecting an ‘okada’ from a rider in Ikorodu.

The trio, operating on Michael’s ‘okada’ in the area, had around 10:00 p.m. accosted another ‘okada’ rider, stopped him and dispossessed him of his motorcycle. They were said to have told the owner that they were police officers from a nearby police station.

The victim on releasing the ‘okada’ to the robbers walked few steps away before crying out for help. This drew the attention of passers-by and the operatives of Rapid Response Squad in the area. They were chased and arrested few metres from the scene.

According to the Ojomeje, the leader of the gang, “ in July 2019, men in police uniform collected my ‘okada’ in Ikorodu Bus Stop. They told me they were Taskforce team from Ebute Police Station. They advised me to meet them there while they took the ‘okada’ away. It was after 10:00 p.m.

“I went from Ebute Police Station to Ijede, Mola and Ladigboye Police Post, there was no trace of them. It was my only means of livelihood. It was exactly a week I got the ‘okada’ on hired purchase at N280,000.

I paid only N40,000 with a balance of N240,000 to settle the owner, Chinedu. I searched for it in all the surrounding police stations but there was no record of it.

“In order to pay the balance because Chinedu couldn’t take the excuse, I borrowed my friends bike, and bit by bit, I paid another N40,000. Because the owner was deeply on my neck for the payment, I sought the assistance of my friend to help me hijack another ‘okada.”

He continued: “I had a MOPOL vest at home thrown away by a former neighbour in Obalende. I appealed to Michael to borrow me his sister’s husband police uniform. The plan was to get a motor bike for me and later on, I would pay them too after I might have finished paying my debt.

“While I put on the MOPOL vest, Ogeh, a food stuff seller put on the police vest and fez cap. At around 10:00 p.m, the three of us set out using Michael’s ‘okada’ to Ita Maga. We collected a bike but we were arrested”.

Protesting vociferously to Ojomeje’s explanation of their roles, Michael and Ogeh stated that they were charmed and made to take an oath by their ring leader. They added that they were offered kolanut to eat after Ojomeje had promised them a successful outing.

The suspects have been transferred to State Criminal Investigation Department for further investigation.

Reacting to the development, the State Commissioner of Police, CP Muazu Zubairu stated that the police would not relent in its efforts at bringing to book criminals who impersonate the police to give the force a bad name.