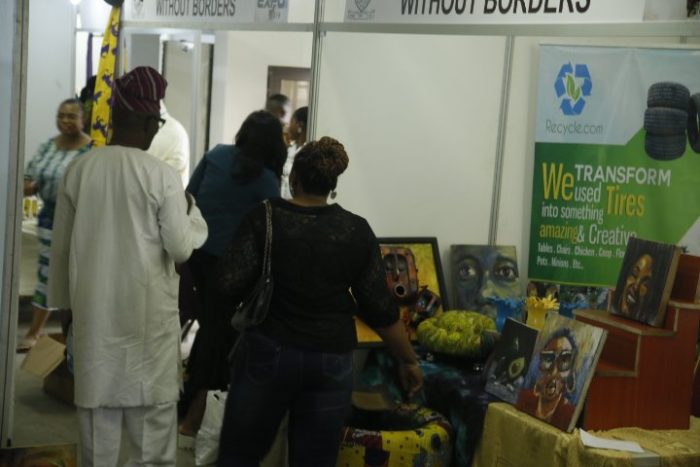 One of the exhibition stand at the fair

Nigeria women have been urged to promote indigenous African products, a feat if adhered to, would reduce unemployment not only among youths but among the entire workforce.

The Chairman, Yoruba Tennis Club, Olawunmi Agbaje, made the pronouncement while declaring open the 4th Naija Fair, tagged Afro-Naija Expo 2019, with the Theme: “Promoting Indigenous African Products”, organised by Yoruba Tennis Club, Ladies Wing, that took place at the premises of the Club House in Lagos at the weekend.

Agbaje, who commended the initiatives of the Ladies Wing of the Yoruba Tennis Club for their initiatives at supporting the men fold in stimulating commerce in the state and contribute their quota to the development of the state, said it would be an added advantage if the group could intensify efforts at promoting indigenous African products, which without any iota of doubt would further assist the state and the country commercial-wise.

“Let me commend the Yoruba Tennis Club, Ladies Wing, for their initiatives at organising trade fair like this every year with different titles that would stimulate our women to be more active and relevant. Meanwhile, I would not fail to advise you to intensify efforts at further promoting indigenous African products which would further stimulate commerce in the state and Nigeria in general”, Agbaje said

The Chairperson of the Ladies Wing, Titilola Agbaje, said the 4th Edition of the fair, with the theme “Afro-Naija Expo, has something for everyone, adding that the Fair was conceived by the Ladies’ Wing made up of the spouses of members of the Club, in 2016 as one of the events to commemorate the 90th anniversary of the club.

She maintained that this year’s edition was targeted at promoting all ranges of indigenous African products, thus creating a bridge between manufacturers, their products and consumers.

She emphasised that the products that were exhibited were indeed world class.

“This year’s edition with the theme, “Afro-Naija Expo: Promoting Indigenous African Products” would remain indelible because it would be remembered to promote all ranges of indigenous African products, which would no doubt serve as bridge between manufacturers, products and consumers”, she said.

The Chairperson, Planning Committee for 2019 Fair, Omotunde Lawson, expressed appreciation to members of the committee for their effort at making this year’s exhibition a successful one, just as she commended the exhibitors and other sponsors of the fair.

The Trade Marketing Manager, Nigerian Bottling Company, Ms Adedolapo Adebowale, commended the initiatives of the Ladies’ Wing, Yoruba Tennis Club for the fair, just as she advised women to be more passionate about business as women were more passionate than men business-wise.

The 4th edition of the Yoruba Tennis Club, Ladies Wing Naija Fair had in attendance different exhibitors both locally and internationally  including public and the private sectors.