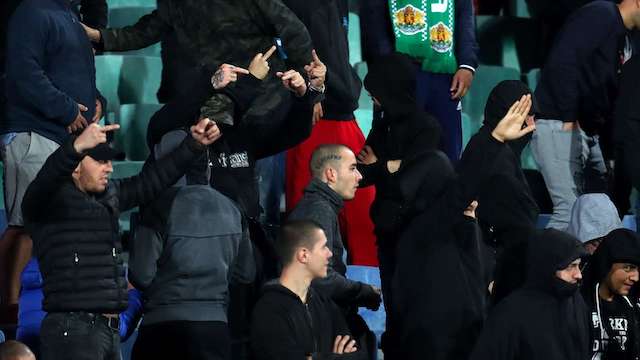 racist gestures by Bulagarian fans in the stands on Monday

The European Championship qualifier between England and Bulgaria in Sofia was stopped in the first half after abuse was registered from the stands.

The game was stopped twice in the first half by the match referee following abuse from the stands.

After discussing the matter with Three Lions captain Harry Kane, the match referee requested the following announcement be made over the tannoy: “Because of racist behaviour which is interfering with the game, the referee has indicated he may have to suspend the match.

The second half is underway with England leading 4-0.

“Please be in no doubt that the game may be suspended and abandoned if racist behaviour continues.”

Marcus Rashford scored in the 8th minute and Ross Barkley pumped two other goals within 12 minutes of each other, while Raheeem Sterling added the fourth goal before the break of a tumultuous first half.