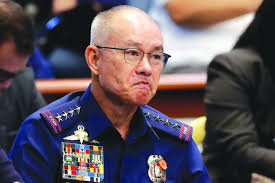 President Rodrigo Duterte has made a bloody war on drugs his signature campaign, to the approval of most voters, despite international outrage about the bloodshed amid fears many suspected dealers have been killed by police in staged encounters and by death squads.

Duterte has rejected the accusations.

In testimony that has raised questions about the government’s campaign, witnesses in Senate inquiries have accused police chief Oscar Albayalde of protecting officers who sold confiscated narcotics back onto the black market.

Albayalde denied the accusations and had ruled out resigning.

On Monday, he referred to the hearing and the fact he was being implicated in the scandal and said he was stepping down to make way for a new police chief.

“After careful thought and deliberation, I have come to the decision to relinquish my post as chief of the Philippine National Police,” Albayalde said in the speech to police officers.