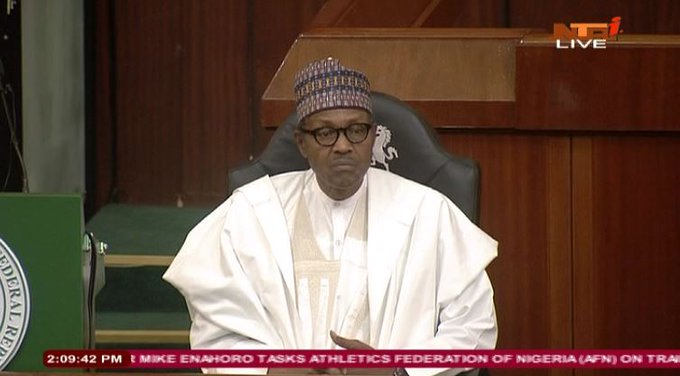 It is no longer news that the much hyped social media induced ‘wedding of the year’ between President Muhammadu Buhari and Hajia Sadia Umar Farouq, the current Minister for Humanitarian Affairs and Disaster Management is nothing but a hoax.

Recall that social media promoters of the said event had made elaborate plans for the nuptial. Colorful invites had been produced and carefully distributed via the social media to selected guests.

In order to give the event a presidential touch, the Aso Rock Villa mosque, was chosen as the preferred setting for the ‘wedding’. Notable Imams and other charismatic clerics were placed on the red alert to officiate at the ‘wedding’.

However, as near perfect and elaborate as the plans for the ‘wedding’ were, its social media sponsors committed a major blunder that made a mess of all the efforts they have put into the whole venture. They failed to secure the consent of the groom and the bride. How awful! No event planner that worth his salt does that.

So, the wedding turned out to be yet another social media scam. From the outset, the President’s men had clearly denied knowledge of any such event. Also, the would be bride, Hajia Farouq had vehemently disclaimed the whole arrangement.

In order to really demonstrate that her husband was not part of the entire phony affairs, wife of the President, Aisha Buhari, who for some time has been on vacation outside the country, is back at the villa. Her return to the rocky lodge has, at least for now, signified that there is no vacancy in the ‘other room’.

But then, the fact that Hajia Buhari had to hurriedly find her way back home to protect her grip on the ‘other room’ is a proof of the far reaching damage that fake news engenders. What if the First Lady was yet to fully complete her business abroad?

Without a doubt, the social media accelerates conversations in a more interactive way that makes communication more effective and worthwhile. It takes communication beyond the limitations of the traditional media, which most often delivers content but doesn’t permit readers, or as the case may be, viewers or listeners, to participate in the formation or development of the content.

In short, social media offers an opportunity to be seen and be heard without any restriction, which the traditional media does not give. Today, our world has been radically transformed courtesy the social media. Information dissemination is now faster and easier while genuine business transactions can be promoted through the medium for a vast global market. Certainly, the social media has made our world more exciting.

A few years back, fake news was not a familiar term, but globally it is now seen as one of the greatest threats to democracy, security, free debate and unity. Aside being a favourite term of President Donald Trump of the United States of America, fake news was also named 2017’s Word of the Year.

Fake news is as wicked as terrorism. It divides the people. It poisons the mind of an unsuspecting public. It promotes falsehood and celebrates deception.

Unfortunately, fake news spreads like wildfire on the social media; getting quicker and longer-lasting attention than the truth. For instance, a deep dive into Twitter shows that fake news was re-tweeted more often than true news was, and carried further.

The outcome of a research led by Sinan Aral of the Massachusetts Institute of Technology, has shown that fake news diffused significantly farther, faster, deeper, and more broadly than the truth in all categories of information, and the effects were more pronounced for false political news than for false news about terrorism, natural disasters, science, urban legends, or financial information. According to the research, it took the real news about six times as long as fake news to reach 1,500 people.

On many occasions, the genuineness of information posted on the social media is suspicious. While the conventional media processes and scrutinizes news gathering and dissemination and, thus, exercises control in addition to operating a feedback mechanism which gives room for refutation when practitioners erred, the social media affords faceless individuals the space to send conniving and spurious information. Sadly, promoters of fake news usually get away with it, since there is no compelling process or law to insist on confutation.

The result is unlimited madness on the social media space. Someone with no concrete substantiation comes up with a carefully crafted fake story or video, puts it on the social space and before you could say jack the whole space becomes animated, discussing and sometimes freely passing judgments based on the ‘strength’ of an unsubstantiated story.

Through this trend, many people have been ‘authoritatively’ confirmed dead while many have equally been labelled ‘looters’, ‘thieves’, ‘fraudsters’ etc. At the end of the day, the victims of such misleading information are faced with the task of responding to issues that never really existed.

Sadly, some youth have become so addicted to social networking sites that you wonder if they do any other productive thing throughout the day. They spend hours using these sites, thereby harming their performance in other fields. Some of them have made a mess of their lives on the account of this uninhibited addiction to social networking sites. There have been instances of many younger folks being lured and inducted into cultism and terrorism and other such social vices through the social media.

Thus, as valuable as the social media is, its abuse can be menacing. The use of a tool largely depends on the users. For instance, a doctor operates with a knife while a murderer could also kill with a knife. For users of the social media, especially the youth, the watchword, therefore, is cautiousness.

Meanwhile, parents, NGOs, religious organizations, related government agencies, educational institutions, and all other concern stakeholders are enjoined to take active interest in taking up advocacy crusades aimed at curbing the excesses of the social media.

Though, it might not be feasible to impose barriers on the cyberspace, the fact that, unlike the traditional media, the social media have no gatekeeper should be of great concern to all well meaning individuals.

-Ogunbiyi is of the Ministry of Information & Strategy, Alausa, Ikeja, Lagos