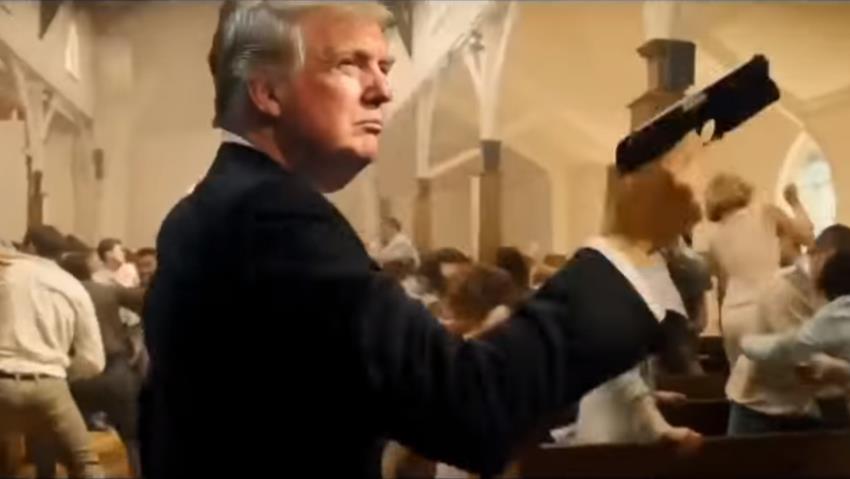 fake Trump in the outrageous video

President Donald Trump and his fans have taken their anti-media stance to a horrendous level, after a video which depicts Trump shooting and stabbing media organizations was played at a conservative conference over the weekend at Trump’s Doral Miami resort.

It is not only the media organisations and journalists that are worried and outraged, politicians are too, after The New York Times reported about the video, played at the American Priority conference.

Democrats and media organizations warned as the video circulated on YouTube and social media that it could incite further violence, with some calling on Trump to speak out and condemn the clip.

After the backlash, the political group said the “unauthorized” video was shown in a side room and wasn’t “approved, seen or sanctioned” by the conference’s organizers. It also says organizers weren’t aware of the video until the Times contacted them about it. The statement goes on to call it “shocking” that the Times didn’t cover any of the sanctioned events at the conference, including a panel discussion condemning political violence.

The video got many concerned.

“At a conference of Trump supporters, they played a video of our president murdering journalists in a church. Last year, a Trump supporter sent bombs to CNN—and a shooter entered a church yesterday. This video isn’t funny. It will get people killed,” tweeted former Rep. Beto O’Rourke (D-Texas), a 2020 Democratic presidential candidate.

Cindy McCain, the widow of former Sen. John McCain (R-Ariz.), weighed in after it was reported that the late senator was among those depicted as Trump’s victims in the video.

“Reports describing a violent video played at a Trump Campaign event in which images of reporters & @JohnMcCain are being slain by Pres Trump violate every norm our society expects from its leaders & the institutions that bare their names,” she tweeted. “I stand w/@whca [White House Correspondents’ Association] in registering my outrage.”

The video, which has been uploaded to YouTube and Twitter since the Times first reported on it, is taken from a clip of the film “Kingsman: The Secret Service” and shows Trump’s head superimposed on the body of a character going on a violent rampage inside the “Church of Fake News.”

He is depicted gunning down and stabbing people with the faces of his critics and media organizations’ logos superimposed onto them. Among the outlets featured in the video are Politico, The Washington Post, NPR and The Hill.

The event’s organizer denounced the video and said his organization was looking into how it was shown at the event.

Lawmakers whose home states and districts have been hit by gun violence were among the first to speak out against the video.

Sen. Chris Murphy (D-Conn.), who has been one of the most prominent advocates for gun control since the Sandy Hook massacre in his home state, urged every parent in the country to watch the video.

“Play it all the way to end. Know that this is the re-election message of your President,” he tweeted. “And then ask yourself — how you sit your kids down and tell them you want this person to lead us.”

Rep. Ted Deutch (D-Fla.), who represents Parkland, Fla., where 17 people were killed at a high school in 2018, highlighted recent mass shootings in places of worship, at the Capital Gazette newspaper and at a GOP congressional baseball practice.

“We must demand better than this,” he tweeted.

Media organizations and journalists were also quick to condemn the video, with many worrying that it would inflame the president’s already incendiary rhetoric toward the press, which he often derides as “fake news” and the “enemy of the people.”

White House Correspondents’ Association President Jon Karl said in a statement that the organization was “horrified” by the clip.

“All Americans should condemn this depiction of violence directed toward journalists and the President’s political opponents,” he said. “We have previously told the President his rhetoric could incite violence. Now we call on him and everybody associated with this conference to denounce this video and affirm that violence has no place in our society.”

CNN, which has been among the most regular targets for criticism from Trump, blasted the video as “vile and horrific” and called on Trump to condemn it in the “strongest possible terms.”

White House press secretary Stephanie Grisham tweeted Monday morning that Trump had not yet seen the video, but would watch it shortly.

“But based upon everything he has heard he strongly condemns the video,” Grisham tweeted.