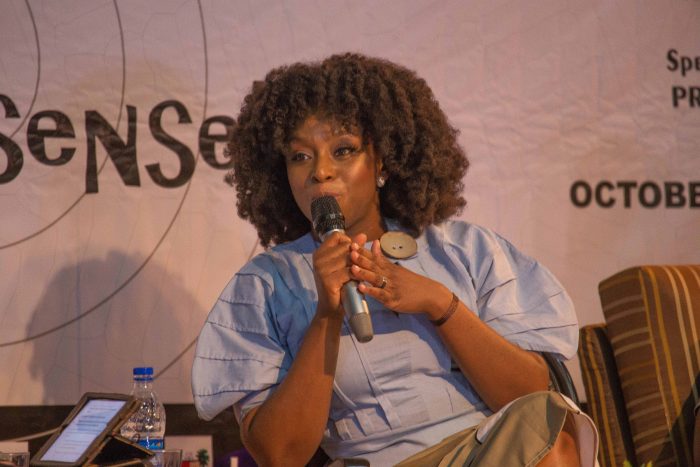 ”Teacher Don’t Teach Me Nonsense” is the theme of this year’s 11th edition of Fela Debate which held at Neca Hall, Ikeja Lagos on Monday, with speakers such as Professor Akin Oyebode, Chimamanda Adichie, Uganda’s lawmaker Bobi Wine and British musician, Kingsley James McLean Daley, better known as Akala speaking to guests and lovers of the music maestro from all walks of life. Creative writer, Sefi Atta moderated the event.

Professor of Law, Akin Oyebode stated that Fela was an Avatar who took on himself the task of decolonizing the African mind, a scorpion in the consciousness of the elites, and even though the legend is late, his good ideas cannot be destroyed. Oyebode further stated that Fela’s music is indelible and indestructible.

Also addressing the issue of the recent viral BBC Sex For Grades investigative report, the professor said there’s a Yoruba adage that states that ”we are all thieves, only those caught are the criminals”.

The activist revealed that he learnt about Fela from a friend not from mainstream media, while also stating that Fela was the revolutionary that influenced him the most.

Bobi Wine who used to sing for the purpose of entertainment, said he changed his music genre by using his songs to address social ills after getting to know about Fela’s music. This, the politician says led to his music and concert being banned in Uganda.

Music is the most powerful tool of communication, he added.

British rapper, journalist, author and activist Kingsley James McLean Daley better known as Akala said those who are of African descent are taught very little about African history, and that people are able to do what they needed to do when they haven’t swallowed all the nonsense they are taught through western education.

During a one- on-one conversation with Chimamanda Adichie, The head of the Kuti family, Yemisi Ransome Kuti asked the award winning author and writer a few questions:

Yemisi: In what way has Fela influenced your view of Africa?

Chimamanda: There’s nothing more meaningful than to share space with women who have achieved a lot and still have grace in how they comport themselves. She also said when she first read Wole Soyinka’s ”Ake”, a memoir and learnt about the first woman to drive a car, Funmilayo Ransome Kuti, who was an activist, it influenced her in a good way.

Adichie added that her brother Chucks who was always playing Fela’s music, made her know most of his songs. Fela represents unapologetic courage, authenticity and pedigree.

Yemisi: Will you consider yourself an activist?

Chimamanda: No Bobi is the real activist.

Yemisi: Has there been areas you find challenging in feminism?

Chimamanda: My writing has given me a platform to talk about what I care about and I measure progress in incremental terms. If I’m able to change a person’s mind, I’ve made progress.

Yemisi: About ”Teacher don’t teach me Nonsense”, migrants are encouraged to give up their culture to gain acceptance, what is your view and advice to cultural diaspora?

Chimamanda: I’m a Nigerian who lives in the U.S. and in Nigeria as well. We don’t really matter. It’s left for us to make that change. Their foreign policy doesn’t reflect that we matter. China and India for example matter to them. Having self confidence comes from knowing where you are from and your history. Know that despite our flaws, every nation has flaws. History should be taught in schools because we do not know our culture. These days, people parade their ignorance and think it is fine. there are certain entitlements that westerners think they have.

I was once asked in an interview in France whether Nigeria has a bookshop.

As regards the political landscape, flooding in Lagos is a major issue.We are not long term thinkers.It’s almost as though we’ve forgotten how to be ashamed, with refuse piling everywhere and blocking the drainage, leading to flooding. Nigerians are very confident but we do not apply the confidence where it is needed. When the government is stealing our money, we stay mute, there’s something dead in us.

Our leaders are selected for us rather than appointed.Take Lagos as an example, we have to make our leaders accountable.

Yemisi: Women have huge roles to play in shaping society, how do you relate to this as a feminist?

Chimamanda: My feminism is about how women can become the best they can possibly be, where they can choose to be a mother or not, married or not and no one will think they have marriage deficiency. The idea of being a superwoman is dangerous because we can’t be everything. Imagine a case where women cannot see masquerades, inherit properties or attend meetings because they are women. These are some of the issues of equal rights, not about hating men.

Concerning the issue of Sex For Grades, a lady is harassed sexually, cannot do well in school and ends up not being able to get the kind of job she deserves. Our culture teaches women to be successful but not as much as men because of the male ego.

Yemisi: As a parent what message do you have for parents and teachers?

Chimamanda: Parents should listen to their kids and being a teacher is difficult in Nigeria because, they are poorly trained. We should encourage teachers not to teach students nonsense. Finally let us patronize made in Nigeria goods and services. I invest in local content, I’m about feminism, fashion, natural hair and politics.

During the question and answer segment, Chimamanda was asked how creative people can pursue their passion.

Chimamanda stated that it is very tough in Nigeria. She said she was lucky to school abroad, and concluded that publicly funded institutions for creative people, providing grants not loans, should be made available.

Senior advocate of Nigeria Femi Falana stole the show when he said Kingsley Moghalu, a presidential aspirant during Nigeria’s 2019 elections was given recognition by the organizers of the event after conveniently moving to the APC, which has now given him an appointment and he has discarded his political party. Falana said it was not fair to give Moghalu any recognition.

Moghalu who had Wole Soyinka’s backing while campaigning for presidency under the Young Progressives Party refuted the attack on him by Falana in a tweet, stating that it is a case of mistaken identity.

I did not receive any appointment from the APC administration! Chief George Moghalu (no relation), an APC stalwart, did! Not fair to be crucified on the basis of mistaken identity or coincidence of names.! https://t.co/z60kmU3QfP

President Muhammadu Buhari appointed the National Auditor of the All Progressives Congress (APC), George Moghalu as the new Managing Director of the National Inland Waterways Authority (NIWA), and this is the person Falana mistook as Kingsley Moghalu.