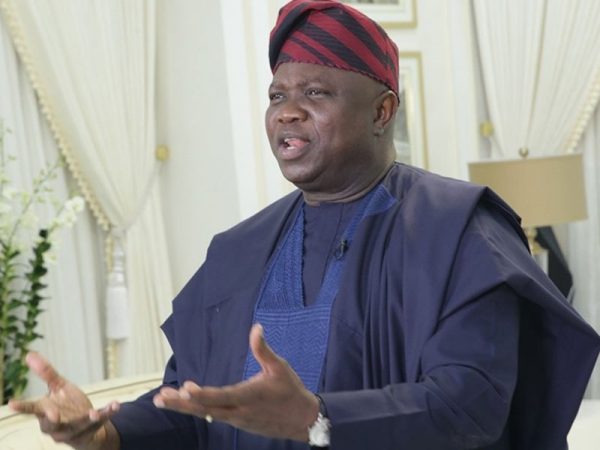 Akinwunmi Ambode: his supporters being wooed for Saturday's bye-election

Immediate past Governor of Lagos State, Akinwunmi Ambode on Tuesday shunned the 16-man House of Assembly Committee set up to investigate alleged shady activities of his administration, even as some commissioners who served under his administration indicted him.

The Lagos State House of Assembly is investigating the former governor in the purchase of 820 mass transit buses at about N7 billion which was not approved by the House and other issues.

The Assembly had last week threatened to issue a warrant of arrest on the governor if he refused to appear before the committee to defend himself.

The committee is chaired by Hon. Fatai Mojeed.

However, Ashade and Oladejo wrote to the House explaining that they would not be available.

Speaker of the House, Mudashiru Obasa said the Assembly would have to send Ambode invitation publicly through newspaper publication and that if he did not still appear, the next option was to issue a warrant of arrest on him.

Submissions by Ambode’s aides who appeared before the committee indicated that they were not carried along in the awards of contract with due process allegedly breached.

Olusegun Banjo, former Commissioner for Economic Planning and Budget, during Ambode’s administration said the purchase of the 820 buses by the former governor was not rooted through his ministry.

According to him, he became commissioner in February 2018, and that he did follow the system he met on ground, which was responsible for shady transactions on the buses that were procured.

He explained that “The way the ministry is structured, it did not allow us to function well. The N24 billion did not come to my ministry. We didn’t have a running system. As a commissioner, I could not approve one naira. All the MDAs approached the Governor directly.”

Banjo added that lots of things were done under Ambode’s administration without the knowledge of commissioners, which showed lack of transparency.

He said there was no provision for the purchase of the 820 buses in the 2018 and 2019 budgets and that no Vote Of Charge (VOC) was issued from his office for the purchase.  “I never approved any VOC for it,” he said.

On unbudgeted funds, he said, “I don’t know what happens to unbudgeted funds when it comes because the ministry of finance does not inform my ministry, we don’t have a running system”.

However, Banjo said that he would make available to the House his handing over notes where he identified the lapses in the system and ways to address the them.

Accountant-General of the State, Mrs Shukrat Umar, when asked if the budget for the purchase of the buses was approved by the State Executive Council.

The Imota rice mill, light-up Lagos project and procurement of LASEMA Rapid Response equipment and engagement of the consultants were all done under shady circumstances as revealed by the heads of the MDA’s who were questioned by the committee members.

Former Commissioners for Agriculture and Energy, Toyin Suarau and Wale Oluwo said many the projects, including the Oshodi interchange and others were never captured in the state budget.