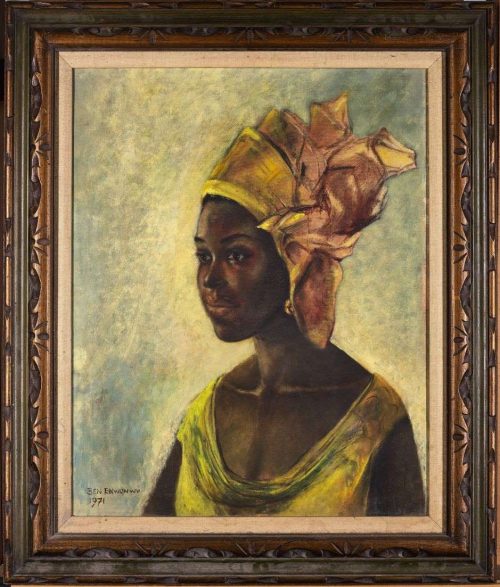 A painting by the Nigerian artist, Ben Enwonwu responsible for the “African Mona Lisa” sold at auction in London on Tuesday for £1.1 million, N508million after the family who owned it googled the signature and realised its importance.

“Christine”, by 20th century master of African modernism Enwonwu, had been in the sitter’s family home in Texas ever since it was painted in Lagos in 1971.

The captivating sitter is Christine Elizabeth Davis, an American hair stylist of West Indian descent. Christine travelled a lot in her life, working in Ghana before moving to Lagos with her British husband in 1969. There, they befriended Enwonwu and Christine’s husband commissioned the work as a gift for his wife in 1971 before they eventually moved back to the US a few years later.

The work was completed in under a week as Christine was able to hold her pose for as long as needed. Christine, who was in her mid-30s at the time, passed away in Texas thereafter. But the painting has remained in the family ever since.

Recently a family member stumbled on the paint and googled the name of the artist, only to find that it was Enwonwu, Africa’s best known artist of the 20th century.

“The family were unaware of the significance of the painting or the importance of the artist, until a chance “googling” of the signature led them to Sotheby’s free Online Estimate Platform,” said the London auction house.

The painting fetched over seven times the pre-auction estimate, finally going under the hammer for £1.1 million (1.3 million euros, $1.4 million).

The work precedes the artist’s 1974 painting of Ife royal princess Adetutu “Tutu” Ademiluyi, which recently turned up in a London flat after not being seen in decades. Adetutu sold for $1.6million.

The portrait is a national icon in Nigeria, with Booker Prize-winning novelist Ben Okri telling AFP that it was thought of as “the African Mona Lisa”.

Enwonwu, who died in 1994, is considered the father of Nigerian modernism.

He made three paintings of “Tutu”, the locations of all of which had been a mystery until the recent discovery.

The works became symbols of peace following the clash of ethnic groups in the Nigerian–Biafran conflict of the late 1960s.