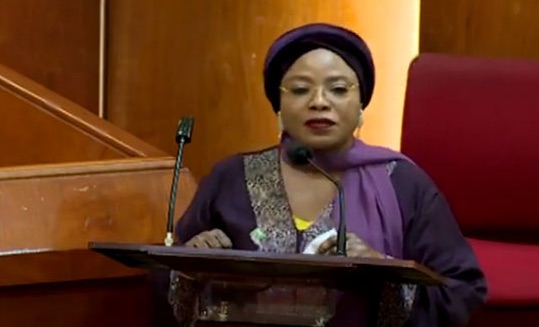 The Federal Capital Territory Administration will partner the six Area Councils and other Agencies of government to address challenges of water supply, sanitation, and hygiene in rural communities.

The minister of state for FCT, Dr. Ramatu Aliyu stated this in a statement by Mr. Austine Elemue, her Special Assistant on Media on Tuesday.

She gave the assurance during an inspection tour of facilities in Gwagwalada Area Council of the FCT.

She said that the provision of potable water, adequate sanitation, and hygiene are primarily the responsibilities of states and local governments.

According to her, if the respective authorities fail to resolve this menace, the target to end open defecation in the nation’s capital on or before 2025 may be unrealistic.

The minister, however, commended the FCT Universal Basic Education Board (UBEB) for the construction of two blocks of VIP toilet at Tunga Maje Secondary School.

Aliyu described as worrisome the assessment by the National Bureau of Statistics (NBS) in collaboration with UNICEF, that 50 percent of Abuja residents defecate in open spaces.

The Minister used the occasion to declare that the present rating was unacceptable, assuring that the FCT Administration was determined to change the narratives.

“It saddens my heart to note that currently, 102,000 children die annually due to diseases related to sanitation. We must join hands to address this menace.

“More worrisome is the fact that the last assessment carried out in collaboration with the National Bureau of Statistics (NBS) and UNICEF, 50 percent of Abuja residents defecate in the open.

”This is unacceptable and we are determined to change the narratives.”

She decried the state of the automated abattoir under construction in Tunga Maje of Gwagwalada Area Council and enjoined the contractor to speed up the progress of work.

She assured the contractor handling the project that the FCT Administration would resolve some ambiguities surrounding the access road with the Federal Ministry of Agriculture and Rural Development.