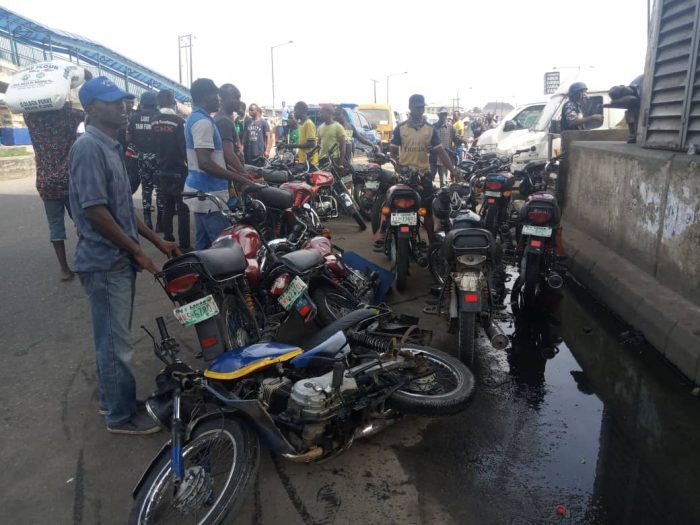 Some of the impounded okadas

Also, an ORide motorcyclist was arrested for driving against traffic.

The Chairman of the Agency, CSP Olayinka Egbeyemi disclosed this on Tuesday, saying that the 134 motorcycles were impounded for flouting traffic regulations and riding along restricted routes at CMS, Marina, Apongbon and Yaba.

He stated that the agency was compelled to embark on the clampdown of motorcycles due to the enormous complaints that reached him about the illegal activities of the motorcyclists and the rate at which they rode carelessly, thereby putting lives of motorists and pedestrians in danger.

Egbeyemi disclosed that the clampdown would stretch down to all axis of Victoria Island, Ajah, Lekki to put a check to the illegal operations and plying of restricted routes on that axis.

He further said the routes they were plying were restricted in accordance with the Lagos Traffic Laws which stated that every motorcycle operator must wear crash helmets, be above 18 years, not ride on kerb/median/road setbacks, avoid restricted routes, not carry more than one passenger/pregnant woman/Adult with baby/Child below 12 years, not install any musical gadgets, must wear an apron, not operate beyond 10pm, operate with a rider’s permit and have their motorcycle registered with government.

He harped on the recklessness of the ORide motorcyclists who were gradually becoming a problem on State roads, driving against traffic, riding on flyover and not minding the casualties that might occur.

He admonished them to adhere to the Lagos traffic rules if not the agency would go after them.

Egbeyemi expressed the readiness of the agency to make sure that the Lagos Traffic Regulations were adhered to in all areas of the state by all commercial motorcycle operators and ensure that the safety of pedestrians were not jettisoned by defiant riders.