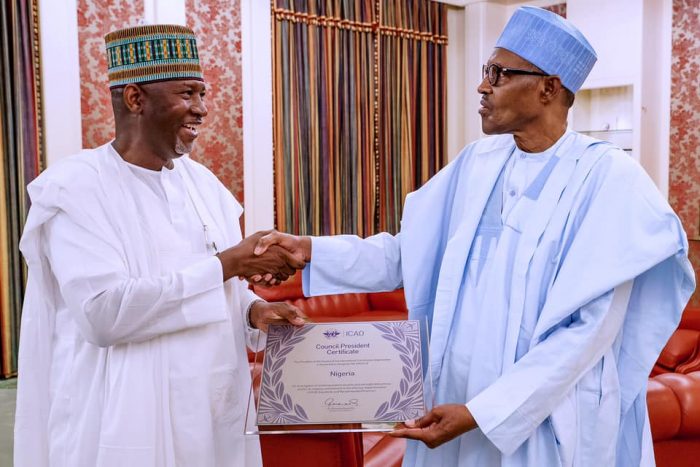 Speaking with State House Correspondents after the presentation of the Certification for Improved Security in Civil Aviation to the president, Sirika said the certificate was presented to Nigeria by the International Civil Aviation Organisation (ICAO) after assessing the country’s aviation security system.

He stated that the feat was recorded by the country, following the restructuring of the nation’s security around the aviation sector.

“ ICAO, having the statutory responsibilities of monitoring, policing and regulating the aviation industry and setting standards, took a survey of 193 member-countries out of which 16 were found to have improved tremendously the security around their aviation system.

“Gladly, Nigeria was one of those 16 member-countries. Our score from the audit of ICAO was 96.4 percent; this is a remarkable improvement from a country that was scoring less than 50 percent in the past.

“Today, from the approvals we got from our president and his guidance, we have been able to attain 96.4 percent, which is near perfection.

“In recognition of this, Nigeria received a certificate in Montreal, Canada during the General Assembly of ICAO, and we are proud to announce that we are part of those 16 member-countries that received this certificate which I just presented to Mr President,’’ he said.

Sirika, who recalled how some passengers of Turkish Airline threatened airport officials in 2015, said the incident had given a wake-up call to the country’s aviation officials.

He said that the officials had kept improving the security architecture across the country’s airports, thus leading to the attainment of a near-perfect situation.

He said: “We developed a template for security, engaged experts, came for approval from the president and he graciously approved that we reorganise the system to make it better.

“We included the appointment of key individuals, including the Head of Aviation Security in the Federal Airports Authority of Nigeria, where we found a seasoned Group Captain, a security expert himself, and got him trained in aviation security and deployed him as head of security.

“Among other things, we put things in place to deal especially with insider security and that got us somewhere on the world map of aviation security.”

According to the minister, all necessary steps will be taken to ensure that the country maintains the standard and continue to do well in the aviation sector.

He announced that already, 721 aviation security personnel had been profiled and trained by the Department of State Security Service in handling of guns and lots, saying that they would soon be deployed to enhance security at the country’s airports.