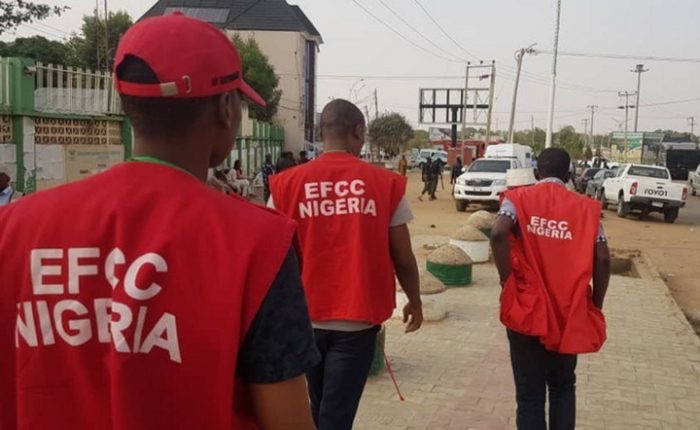 EFCC operatives: the work of the agency continues

A State High Court in Uyo, Akwa Ibom State, presided over by Justice Archibong Archibong on Tuesday remanded the trio of Norbert Bassey Rampa, Gabriel Daniel Udo and Patrick Essien in Uyo prison for impersonating officials of the Economic and Financial Crimes Commission, EFCC and the Independent Corrupt Practices and Other Related Offences Commission, ICPC.

The defendants were arraigned by the EFCC on a five-count charge bordering on conspiracy,forgery and impersonation.

Their journey to the dock started shortly after they paid a courtesy visit to the Uyo zonal office of the EFCC on September 19, 2018, under the aegis of Grassroots Development Advocacy Initiative, GDAI, which they claimed was a registered organisation under the auspices of National Anti-Corruption Coalition, NACC.

According to the second defendant, Essien, the supposedly National Director, the aim of the visit was to request for operational powers to enable them engage fully in the fight against corruption. He went on to speak extensively on the various trainings their members had gone through to ensure grassroot engagements in budget processes, aimed at sustaining the anti-graft war. Rampa, the first defendant, who claimed to be the Director of programmes also highlighted on their “massive collaboration” with the ICPC.

Their request was refused by the zonal head who advised them to report all perceived corrupt practices to the Commission.

The defendants paid no heed to the advice as they embarked on various levels of forgery and impersonation to facilitate their criminal activities. Their modus operandi was purely hinged on intimidation of innocent persons and extortion of same under the pretext that they were in an operational joint tax force of both the EFCC and the ICPC.

But they ran out of luck when they picked on one Aloysius Udobong, an elderly retiree for their game of extortion. When their intimidation could not work with the prospective victim, they decided to send in a fictitious petition against him to the EFCC.

Udobong was invited and investigations turned the the table against the defendants as they automatically became the suspects.

One of the counts reads: “Norbert Bassey Rampa “M”; Gabriel Daniel Udo “M” and Patrick Essien “M” on or about 28th June, 2019 in Uyo within the jurisdiction of this Court, did falsely represent yourselves to be persons employed in the public service, to wit: Independent Corrupt Practices and Other Related Offences Commission (ICPC) and Economic and Financial Crimes Commission (EFCC) by issuing a letter titled “Notice of Fact-finding Mission” to one Aloysius Udobong.”

They pleaded “not guilty”.

In view of their pleas, T. N. Ndifon, the prosecution counsel prayed the court for a trial date and for the defendants to be remanded in prison custody.

The defence counsel, Itorobong Michael Umoren, informed the court of their motion on notice filed and served on the prosecution today.

The matter was thereafter adjourned to Monday, October 21, 2019 for hearing of bail application and Tuesday, January 21, 2020, for commencement of trial.

The defendants were remanded in prison custody.