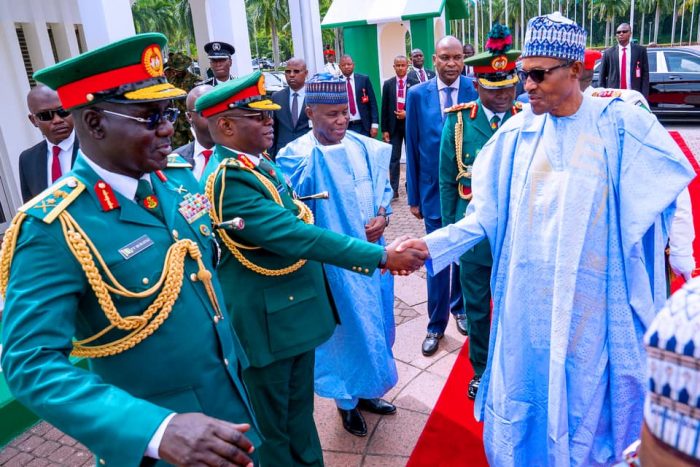 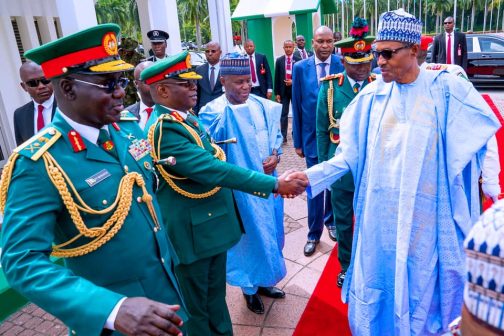 President Muhammadu Buhari on Wednesday inaugurated the 2020 Emblem Appeal Launch for the Armed Forces Remembrance Day celebration with a donation of N10 million on behalf of the Federal Government.

The president donated shortly before the commencement of the weekly Federal Executive Council (FEC) meeting at the Presidential Villa, Abuja.

Buhari encouraged all citizens to donate generously in support of veterans and dependents of the fallen heroes. The president also called on Nigerians and others resident in Nigeria to procure and wear the emblem with pride, to identify with those who sacrificed their lives for the peace and security of the nation.

He enjoined government agencies at federal and state levels to continue to patronise services of the Nigerian Legion Corps of Commissionaires in the provision of security services.

“I am happy to note that the Legion has continued to be a rallying point of veterans and has done its part in catering for the welfare of their ailing members. I enjoin the leadership of the Legion to continue in this spirit.  I also urge Nigerians to accord them the needed support, friendship, and patronage.

“As the Grand Patron of the Nigerian Legion, I wish to pledge my continued support and that of the Federal Government to the organisation. My appreciation goes to the State Governors who are patrons in their respective States for the support they are providing to the Legion.

“As I launch the emblem shortly, I wish to call on all Nigerians and others resident in Nigeria to procure and wear the emblems with pride to identify with those who laid down their lives for the peace and security of our fatherland,’’ he said.

According to the president, the potentials of the ex-servicemen are enormous and the economy can tap into this for national development.

President Buhari charged the citizens not to forget those currently engaged in internal security operations, particularly the on-going war against insurgency in some parts of the country.

He said: “It is indeed befitting to honour the memory of the gallant officers and men who paid the supreme sacrifice to keep the country united. For those who survived with varying degrees of incapacitation, they require our attention and care and we will continue to provide and cater to them.”

According to the president, the nation is appreciative of the gallantry and sacrifices of officers and men of the armed forces in the campaign against insurgency and other internal security operations.

He noted that their efforts had led to the return of normalcy in affected parts of the nation.

“The Boko Haram terrorists have been substantially defeated and degraded to the extent that they are only daring soft targets.

“However, all hands must be on deck to check the attacks on soft targets, mostly innocent Nigerians. The peace and security of Nigeria are non-negotiable and the security agencies must continue to do their work diligently.”

President Buhari reiterated his administration’s determination to continue to provide necessary logistical support to the military. He said this was necessary to ensure that “the armed forces operate with the best modern warfare equipment, while at the same time adequately addressing the issues of their welfare’’.

Buhari said the government would remain steadfast in developing its alliances with neighbours and friends in the international community for the total defeat of the insurgents.

The president maintained that the task of resettling and rehabilitating victims of the insurgency as well as the reconstruction of territories affected by the war would continue to be one of the priorities of his administration.

“We shall not rest until all our displaced persons are safely resettled into their communities without fear of further attacks. It is for this reason that the North East Development Commission and Federal Ministry of Humanitarian Affairs, Disaster Management and Social Development were established.

“The Executive Arm of Government hereby commends the National Assembly for the passage of the Bill establishing the Commission.

“We hope that with prudent management of limited resources and support from well-meaning Nigerians and Corporate bodies, the Commission working in close collaboration with the Ministry and friends abroad will be able to deliver on their mandate,’’ he added.

President Buhari commended the “rising trend, where business concerns offer discounted services to our men and women in the Armed Forces in appreciation of their selfless sacrifices to the fatherland’’.

“We commend these laudable initiatives and urge more of our business concerns to do likewise. Such gestures would no doubt encourage them in defence of our country and its people.’’

Other personalities at the occasion included Chief of Staff to the President, Malam Abba Kyari, cabinet Ministers and security chiefs.