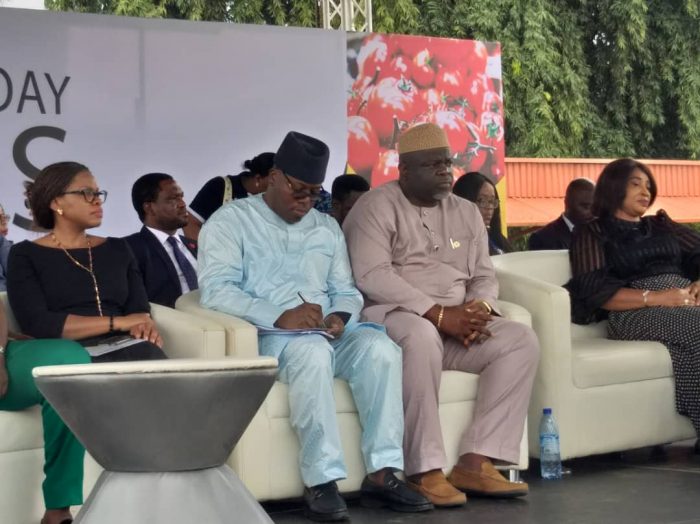 Commissioner for Agriculture, Prince Gbolahan Lawal and others at the World Food Day celebration

Lagos State Governor, Mr. Babajide Sanwo-Olu has disclosed that the State Government is in the process of acquiring an estimated 32,000 hectares of farmland for rice cultivation in seven states.

Sanwo-Olu, who spoke in Lagos today on the occasion of this year’s Grand Finale of the World Food Day celebration in Lagos listed the states as Ogun, Oyo, Osun, Ekiti, Ondo and Kebbi as well as Lagos.

He said that a key component in the food security programme of the State government was the 32 metric tons per hour capacity Integrated Rice Mill in Imota which is expected to be completed and commissioned in the next seven months.

The governor, who was represented by the Secretary to the State Government, Mrs. Folasade Jaji stated that when completed, the mill would ensure sustainable supply of wholesome rice at an affordable price to the populace in Lagos and help to reduce rice importation into the Nigerian economy.

He said that the theme for this year’s celebration, “Our Actions Our Future: Healthy Diets for a Zero Hunger World” spoke to the need for a collective action towards not only increasing food production but also ensuring that adequate attention was paid to the quality of food being consumed adding that the theme aptly highlights the state government’s efforts through the food security initiative and commitment to prevent the consumption of unwholesome food.

“Today, we are happy to join the rest of the World in celebrating this year’s World Food Day. This annual celebration being spearheaded by the United Nations Food and Agriculture Organisation, is about raising awareness on issues related to food such as poverty and hunger and to highlight efforts being made by Governments, Institutions, Organizations and individuals to mitigate the negative effects on people,” Sanwo-Olu averred.

The governor said that the only way to effectively fight poverty and hunger in the country was to boost agricultural production and prevent post-harvest losses and wastage which he noted constitute a major threat to the achievement of food security objectives.

While noting that the use of Reusable Plastic Creates [RPCs] as alternative to Raffia baskets for the carriage of perishable farm produce was being promoted as a strategy to minimize wastage in the State, the governor enjoined farmers and traders in the State to embrace this new initiative for improved profit.

“We have to imbibe the lessons learnt from the dwindling returns from oil to encourage family participation in farming so that most of our basic needs could be met locally and we would be independent of others to feed ourselves. We have also put this to practice in our schools where we have established different farming enterprises to train and teach the students in modern farming techniques,” Sanwo-Olu explained.

According to the governor, Lagos State was one of the participating States in the World Bank Assisted APPEALS Project which was aimed at enhancing the agricultural productivity of small and medium scale farmers and improve value addition along priority value chains, stressing that the selected value chains for the State which aligned with her comparative advantage in agriculture were poultry, rice and aquaculture.

He added that the project was also collaborating with Africa Rice for the development of Pure Ofada Rice Strain, capacity building for seed out growers and rice-based products and as such no fewer than thirty-five farmers and State Officers had been trained while the Institute is expected to supply 200kg of foundation Ofada seed by February 2020 for cultivation.

The Governor added that the State Government recognized the contributions of hard working and enterprising farmers in Lagos State and assured them of the State Government’s continued support in order to ensure greater output and bountiful reward for their efforts.

Earlier, the State Commissioner for Agriculture, Prince Gbolahan Lawal stated that the State Government had instituted and encouraged the cultivation of crops under the irrigation farming and the use of greenhouses in order to overcome the various challenges posed by the change in climatic conditions as a result of the global warming.

He said that climate change had equally greatly affected the growth and multiplication of fish in the water bodies thus in a bid to address this issue, the State Government has embarked on some innovations such as the Cage and Pen Culture where fish are cultivated in nets in the deep sea as a way of synthesizing a natural habitat for them.

“A prototype of this Cage and Pen Culture is presently being set up at Agbowa. The list of other areas where the Ministry of Agriculture has put up a revolution which advertently is combating the effect of climate change as it affects agriculture are the reforms in abattoirs across the State to provide hygienic meat for the populace and the acquisition of Agricultural land outside the state to exploit and reduce cost of production outside the State in order to stem the tide of rising prices of food in the State among others,” Lawal said.