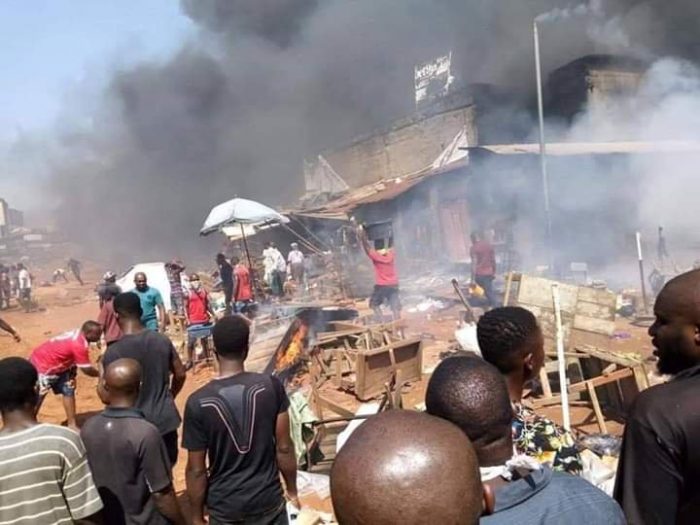 Scene of the tanker fire

The Police in Anambra have confirmed the death of yet to be identified woman and her child following petrol tanker fire incident recorded on Wednesday in Onitsha.

SP Haruna Mohammed, Police Public Relations Officer (PPRO) in the state confirmed the death in a statement issued to journalists in Awka.

Mohammed said that the bodies of the unidentified woman and her baby, who were burnt beyond recognition by the inferno, had been deposited at the Toronto Hospital, Onitsha.

He said that the fire, which started at about 12:59 pm, occurred when a tanker carrying petroleum product lost control and fell around Upper Iweka area of Onitsha.

“The petroleum product later caught fire and affected many shops and houses,” he said.

The police spokesperson said that the Commissioner of Police in Anambra, Mr John Abang, had visited the scene for on the spot assessment.

Haruna appealed to residents of Onitsha to remain calm while men of the Fire Service department combat the fire.

The PPRO said that consequent upon the unruly conduct of some street boys, the police patrol teams had cordoned off the area to prevent hoodlums from taking advantage to loot while efforts were still ongoing to put out the fire.

An eye witness had told NAN that no fewer than four persons have so far died in the incident as the fire later spread to Ochanga Market, Onitsha.

“The fire started in front of Toronto Hospital Onitsha, before it spread to Ochanga Market area.

“I saw four lifeless persons, while a number of persons are still trapped in a building still burning,” he said.