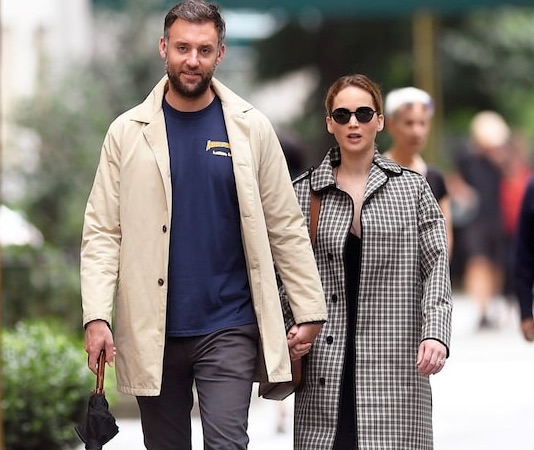 American actress Jennifer Lawrence and her fiancé Cooke Maroney, are set to tie the knot on Saturday Oct. 19 in the presence of 150 guests in a Swanky Rhode Island venue.

The Oscar-winning actress, Lawrence, 29, and the art gallery director, Maroney, 34, have decided to settle down after an eight month engagement.

The actress and the art dealer said they had enlisted the help of celebrity wedding planner, Mark Seed, to throw a spectacular party for around 150 friends and family members.

According to them, the wedding would feature a mouth-watering gourmet menu set to tickle everyone’s tastebuds and with complete specialty cocktails.

The two lovebirds got engaged after a year of dating, also after being introduced by mutual friends.

The romance began just months after Jennifer split from the director of ‘Mother!’, Darren Aronofsky, 50, in Nov. 2017 after a year of relationship.

It has been claimed that their age gap caused issues, as well as Jennifer admitting they were never able to switch off from talking about work.

The actress, who had been in numerous relationships before now, had earlier revealed in an interview that ‘She cannot wait to be married.

Lawrence’s career progressed with her starring role as Katniss Everdeen in the Hunger Games film series (2012–2015), which established her as the highest-grossing action heroine of all time.

She went on to earn accolades for her collaborations with director David O. Russell .

Her performance as a depressed young widow in the romance film ‘Silver Linings Playbook’ (2012) earned her an Academy Award for Best Actress, making her the second – youngest winner of the award.

She has since starred in the science fiction romance, Passengers(2016), the psychological horror film, Mother (2017), and the spy thriller Red Sparrow (2018).

Lawrence is an outspoken feminist and has advocated for Planned Parenthood

In 2015, she founded the Jennifer Lawrence Foundation, which has advocated for the Boys and Girls Clubs of American and the Special Olympics .

She formed the production company Excellent Cadaver in 2018(