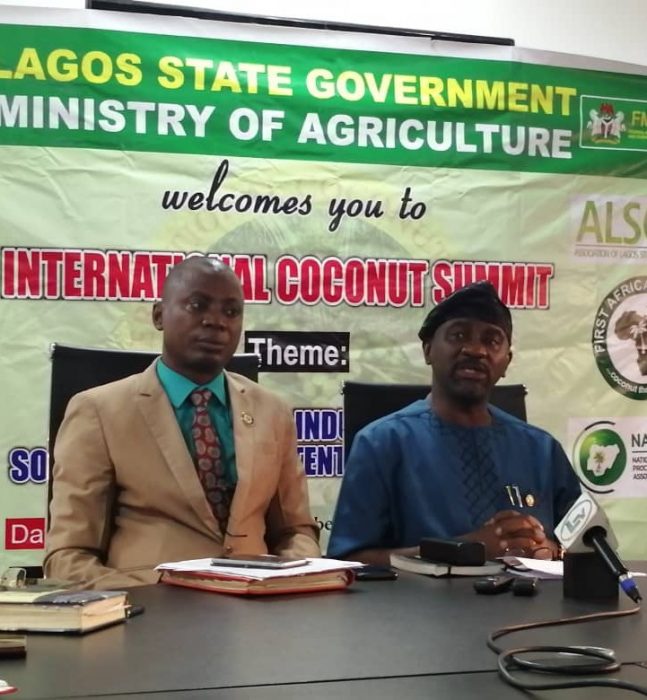 Lagos State Government says it is convoking a maiden International Coconut Summit that is expected to explore, exhibit and evolve new ideas for sustainable development of the coconut value chain.

Special Adviser to the State Governor on Agriculture, Ms Abisola Olusanya who disclosed this on Thursday in Lagos at a press briefing, said this was in line with one of the objectives of the State Governor, Babajide Sanwo-Olu of making Lagos a 21st century economy as coconut, being a major cash crop of the State, had a critical role to play along this line.

The Special Adviser, who spoke through the Permanent Secretary, Ministry of Agriculture, Dr. Olayiwole Onasanya explained that the Summit was expected to attract over 500 participants both from within and outside Nigeria.

“It is interesting to note that apart from captains of industries, investors, and researchers among others with interest in coconut value chain locally, individuals and organizations from South Korea, Malaysia, Indonesia, India, Philippines as well as other West Africa countries have shown interest in participating at the Summit,” Olusanya said.

According to her, the objectives of the Summit included the need to increase awareness and sensitization on the economic potentials of coconut value chain, providing a good platform for the stakeholders in the value chain to network and attracting high network investors into the coconut value chain.

She added that a robust business session has been incorporated into the summit stressing that topical coconut issues, exhibitions of products and technologies in the value chain as well as networking and interaction would also be featured at the Summit.

Olusanya said that some of the coconut groves would be rehabilitated, thereby resulting in an improvement of over half a million metric tons of coconut yield.

She also said that the over 180 products which could be derived from coconut were not being fully tapped, adding that the Summit was expected to showcase the potentials of coconut.