No deal with government yet, says NLC President 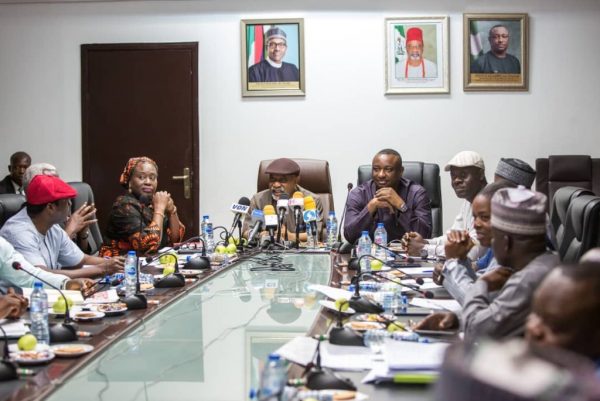 Ministers of Labour and Employment, Ngige and Keyamo at the meeting with labour leaders

The President Nigeria Labour Congress (NLC) Dr Ayuba Wabba, has described as mere speculation, reports of agreement to a 20 per cent and 13.5 per cent consequential adjustments for workers on Grade Levels 7-14 and 15-17 respectively.

Wabba said although labour and the government’s representatives have made concessions, they were both discussing to reach a definite agreement on the salary adjustments.

“We have made progress in many areas. The areas we are talking is that of implementation and the consequential adjustment, that is the only subject matter that is under consideration and that is the subject matter we are trying to conclude and ensure that there is an agreement and then we can share with you.

“We should work on the basis of information that is credible and we will be able to give you that information at the appropriate time.”

There were reports of Federal Government agreeing to a 20 per cent consequential adjustments for workers on Grade Levels 7- 14 and and 13.5 per cent for those on 15- 17.

Wabba said both parties were still consulting on some grey areas and saw the need to adjourn till later Thursday to allow for those given assignments on both sides to get back to the larger house.

“Finally, we agreed on so many areas, which hitherto we could not agree on, and we’re adjourning the meeting, we’re giving assignment to some people on both sides and we’ll go and do the work and get back to you.

“Therefore we have consensually agreed that we will reconvene this meeting at 7 p.m. today (Thursday), like I said earlier, those that were given assignment to complete their assignment and bring them back to us.

“Meeting has been moving on smoothly, as you can see from here, there is progress, it is very cordial, nobody is fighting.

“Some committees need to do some computation, you can see that they have worked up to the early hours of today, that is, in the true spirit of collective bargaining is give and take and that is what we’re trying to do and ensure that we get the process concluded.”

On whether Nigerians should stay at home for the proposed strike, Wabba said with collective bargaining still in progress, embarking on strike was not the practice.

“Our practice is that until we are able to conclude the issues and that we are able to inform them appropriately but not mid way when there is no date that we are making progress to say that we should abruptly disrupt the process of collective bargaining.”

On Delta state strike, he said the leadership of the union has not pronounced nationwide strike, but still on negotiation table, calling it a misinformation.

“I am not sure of what you are saying, because we give instruction to all our members in the same manner, and clearly speaking, the instruction we gave, if it is only a state, then it is a misinformation.”

The Minister of State for Labour and Employment, Dr Festus Keyamo, had earlier debunked the trending story that the Federal Government had agreed to labour’s position on consequential adjustment on minimum wage.

“Kindly ignore the trending story that the Federal Government has agreed with Labour a 20 per cent and 13.5 per cent consequential adjustments for workers on Grade Levels 7- 14 and 15- 17 respectively. As you can see, we are still discussing this minute.”

Labour had said the body would not be able to guarantee industrial harmony from Oct. 17, if the government failed to reach a consensus with it on Oct. 16 over the consequential adjustments of the minimum wage.

The meeting which commenced 5:00 p.m on Wednesday ended 2.a.m. on Thursday, and was yet to reach any agreement following several breakout sessions and consultations.

The Federal Government, however, presented a proposal of 11 per cent salary increase for officers on grade level 07 to14 and 6.5 per cent adjustment for workers of grade level 15 to 17.