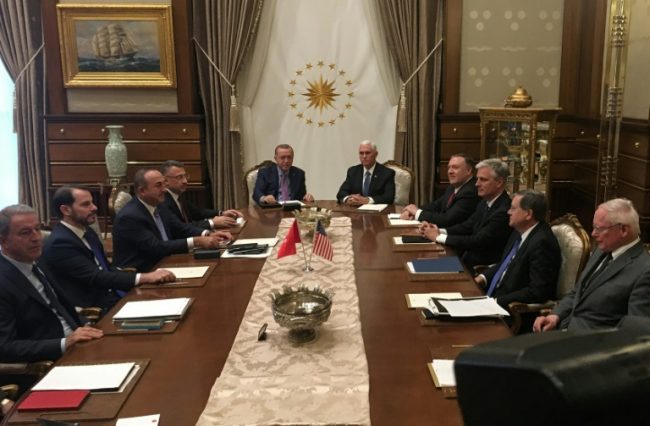 Turkey has agreed to suspend its Syria offensive for five days and will end the assault if Kurdish-led forces withdraw from a safe zone along the border, US Vice President Mike Pence and Turkish officials said on Thursday.

The agreement for 120-hour ceasefire to allow a Kurdish militia to pull out was hailed by US President Donald Trump as a “great day” for Turkey and the Kurdish population.

Kurdish forces will have to withdraw from an area that is 32 kilometres deep (20 miles), which is expected to eventually become a “safe zone” that Turkey has sought for months, as part of the US-Turkey deal.

The Kurdish-led Syrian Democratic Forces (SDF) chief Mazlum Abdi said they were “ready to abide by the ceasefire,” covering the area from Ras al-Ain to Tal Abyad.

The result will be welcomed by the international community after Turkey had vowed only a day before to press ahead with the cross-border operation, which had been facilitated by Trump’s withdrawal of US troops from northern Syria.

After a meeting with President Recep Tayyip Erdogan, Pence told reporters in Ankara that Turkey’s operation “will be halted entirely on completion” of the pullout and following that, the US would withdraw recently imposed sanctions.

“Our commitment with Turkey is that we will work with the YPG members and… (SDF) to facilitate an orderly withdrawal in the next 120 hours,” Pence said. “Let me say that’s already begun.”

The offensive which began on October 9 against Syrian Kurdish fighters who Turkey brands as terrorists had been widely condemned, with many European countries including Germany imposing arms embargoes.

Turkish Foreign Minister Mevlut Cavusoglu insisted to journalists in Ankara that Turkey was “suspending the operation, not halting it”.

“This is not a ceasefire. A ceasefire is reached between the two legitimate parties.”

Ankara considers Syrian Kurdish YPG militants, who make up the bulk of the SDF, to be an extension of the outlawed Kurdistan Workers’ Party (PKK) — a group that has fought a bloody insurgency inside Turkey for 35 years.

The Turkish government had widespread support for its operation at home, though the YPG had been a major US ally for the fight against Islamic State inside northern Syria.

The Syrian Observatory for Human Rights war monitor said more than 300,000 civilians had been displaced within Syria since the start of the assault, calling it one of the largest upheavals since Syria’s civil war began in 2011.

The monitor said nearly 500 people have been killed including dozens of civilians, the majority on the Kurdish side.

The Erdogan-Pence meeting lasted about one hour and 20 minutes — longer than expected according to a US official — and they were later joined by Secretary of State Mike Pompeo and other officials for more talks.

The deal was “a great day for civilisation”, Trump later said in Fort Worth, Texas, where he is to hold a reelection rally.