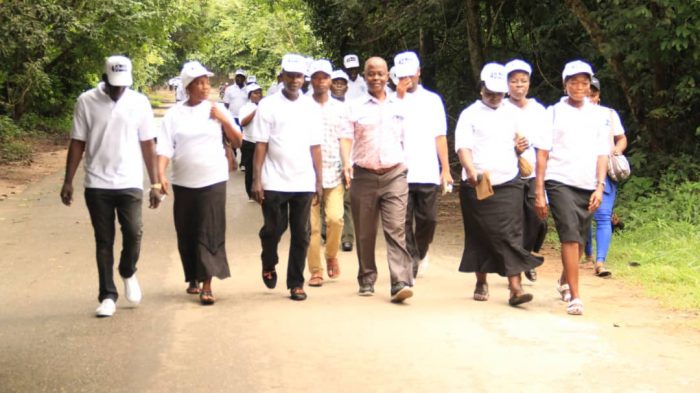 The former Principal, Alhaji Badmus ( 3rd right in front row) with his students during the walk.

The walk, which covered two kilometres from Oja-Oba through Osun grove to the school compound, had old students struggling to match the pace of their septuagenarian principal.

“I am fulfilled by this event which is my dream comes to a reality. The walk is an exercise which I undertook with joy. Age is a matter of number, hence my resolve to be part of it, and I am happy no injury was recorded,” the elated educationist said.

As part of the anniversary, and for key roles played in the establishment and development of the school, a senior lecturer at the Obafemi Awolowo University, Ile-Ife, Professor Richard Olaniyan and other personalities were recipients of awards of excellence by the old students association.

Professor Olaniyan was the guest lecturer at the event held at the Fountain University, Osogbo, where he described education system as important critical infrastructure that must function effectively if the nation is desirous of survival in a globalized world.

He, however, said that Nigeria still had a long way to go.

In his lecture titled ‘Nigeria’s Educational Development: Role of Alumni Association’, the professor argued that successes of the alumni advertise their colleges better than physical structures and facilities.

“According to the National Universities Commission (NUC), Nigeria presently has a total of 174 Universities comprising 43 Federal, 52 State and 79 Private Universities, making it one of the largest higher education systems on the continent. Of this number, however, only two are ranked in the top 100, according to the 2019 Times Higher Education World University Rankings. These are Covenant University and the University of Ibadan,” he said.

The event witnessed two cultural performances by the students and election of new executive committee of the association during which an Assistant Editor of Tribune Titles, Tunde Busari, unanimously emerged as president of the association.