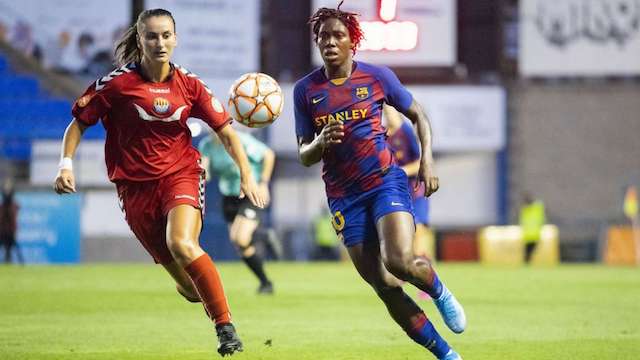 Asisat Oshoala inspired her Barcelona team to a first leg thrashing of Minsk, their Belarusian opponents on Thursday in the UEFA Women’s Champions League Round of 16 game.

The Spanish giants proved too strong posting a 5-0 scoreline.

Goal.com reported that while Oshoala was on target, Emuidzhi Oghiabekhva failed to save Minsk from a 5-0 humiliation.

After powering Lluis Cortes’ ladies past Sporting de Huelva last week, the Super Falcons captain was hoping to help her side secure a first-leg lead against their Belarusian champions.

Oshoala did not hesitate to put Barcelona ahead and also score her first Champions League goal since last season’s final when she finished off Caroline Hansen’s pass just six minutes into the game.​

After scoring the opener for Barcelona, the 25-year-old Nigerian assisted Aitana Bonmati to net the third goal two minutes after Marta Torrejon doubled the lead for the hosts at Estadi Johan Cruyff

In the 26th minute, Bonmati bagged her brace of the match and their fourth before Jenni Hermoso, who replaced Oshoala in the 60th minute, netted the fifth five minutes from full-time.

Cameroon’s Alvina Niyolle played from start to finish with Ogbiagbevha, who remains joint-top scorer with nine goals, while Cote d’Ivoire’s Nadege Cisse was in action for 81 minutes for Minsk.

With the big first-leg win in Spain, Barcelona now hold a massive advantage ahead of the second leg billed for October 30 in Belarus.