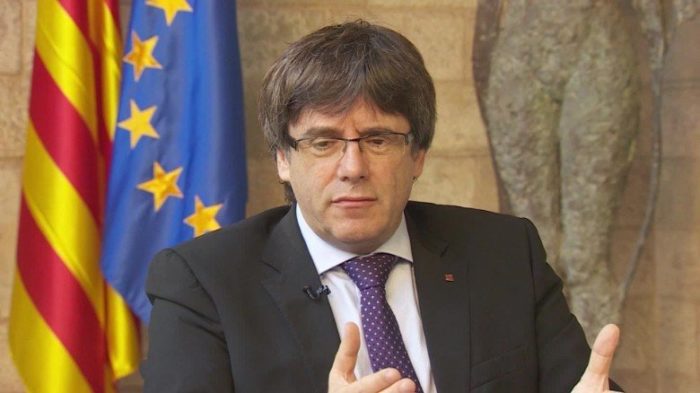 A fourth night of fighting erupted late Thursday and pro-independence labor unions walked off the job Friday to oppose prison sentences given to several separatists stemming from the region’s last attempt to secede two years ago.

Puigdemont led the breakaway effort in 2017 when he staged a unilateral declaration of Catalan independence from Spain. He was ultimately forced to give up power and fled to Belgium as Spanish authorities went after he and several members of his administration. He’s wanted on charges of sedition.

“Puigdemont, accompanied by his lawyers, has appeared, voluntarily, before the Belgian authorities in response to the European arrest warrant issued by the Spanish Supreme Court,” his office said Friday.

The office said Puigdemont complied with the warrant but opposes extradition to Spain. A member of his team told Belgian newspaper Le Soir the former premier went to police “on his own initiative,” adding, “We will explain shortly the reasons for his choice.”

Belgian lawyers have warned the extradition process could be long and slow, especially if Puigdemont’s attorneys interfere. Belgium does not have an equivalent charge for sedition.

The striking unions Friday led to roadblocks and flight cancellations. The workers are protesting a decision this week by the Spanish Supreme Court to send nine separatists to prison for their support of the 2017 secession attempt, including former Vice President Oriol Junqueras.

Five simultaneous marches are slowly advancing through Barcelona, Catalonia’s capital. The AP-7 highway was blocked off near Autonomous University, along with several others. One group broke into the La Caixa bank and threw fireworks at police who tried to stop them. The bank houses the Spanish government’s delegation for Barcelona.