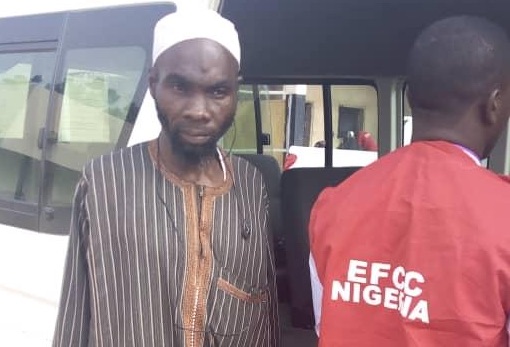 A fake whistleblower was docked on Friday by the Kano Zonal Office of the Economic and Financial Crimes Commission, EFCC.

The fake whistleblower, identified as Abdullahi Tijjani was charged in the court of Justice O.A. Egwuatu with one-count of deceiving the Commission with false information.

The defendant allegedly misled operatives of the Commission by alleging falsely that a staff of Yankura Branch of EcoBank Plc, unlawfully withdrew the sum of N7,200,000 (Seven Million, Two Hundred Thousand Naira) only from his corporate bank account.

The charge reads that “You Abdullahi Tijjani on or about 15th March, 2019 in Kano within the jurisdiction of this honourable court, with intent to defraud, misled the officers of the Economic and Financial Crimes Commission in the course of the exercise of their official duty, by giving false information that a staff of Yankura Branch of EcoBank Plc unlawfully withdrew the sum of Seven Million, Two Hundred Thousand Naira, only from your account with the bank with account name Bawahala Da Yardar Allah Investment Limited and account number 5852011911, which information you knew to be false and thereby committed an offence contrary to Section 39(2)(a) of the EFCC Establishment Act, 2004 and punishable under Section 39(2)(b) of the same Act.”

The defendant pleaded not guilty to the charge, prompting prosecution counsel, Sadiq Hussein to ask the court for a trial date, while the defence counsel moved an application for his bail.

Justice Egwuatu granted the defendant bail in the sum of N1million and two sureties in like sum and adjourned the matter till November 19, 2019 for commencement of hearing