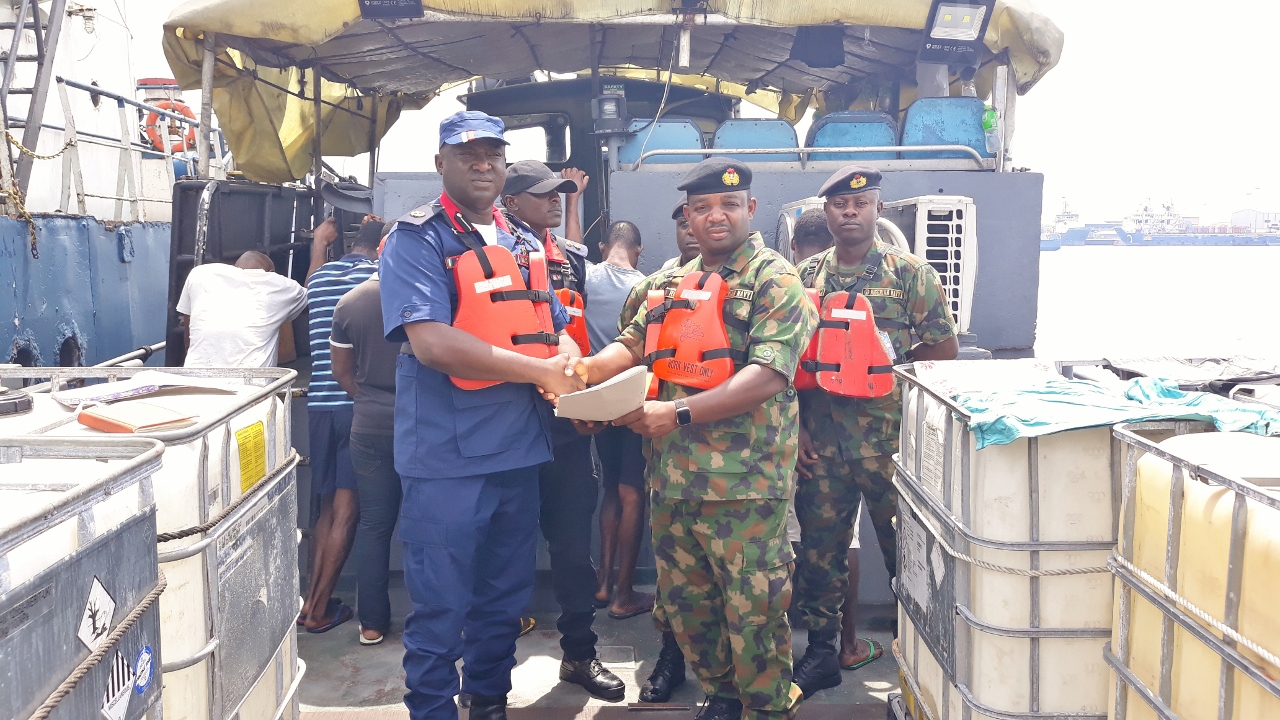 The NSCDC and Nigerian Navy collaborate to protect the waterways. Image via NAN

The Nigerian Navy on Friday said it arrested seven alleged impostors parading themselves as security personnel in Port Harcourt.

Rogo said the suspects, who were onboard a ‘rogue vessel’, MV Workhorse, were intercepted while escorting an oil tanker, MV Osamewe to an undisclosed location without a permit.

“In line with the Nigerian Navy policing role on the maritime domain, on Sept. 6, we got tip-off of a vessel carrying out illegal escort duty for an oil tanker.

“Based on this intelligence, we deployed NNS Pathfinder patrol gunboats to Bonny Anchorage to make the arrest. On reaching there, our patrol elements arrested seven crew members onboard MV Workhorse for providing illegal armed escort to an oil tanker, MV Osamewe.

“The suspects could not provide the appropriate permit to operate as a private maritime logistic support security vessel at the time of arrest,” he said.

The Navy and the Nigerian Maritime Administration and Safety Agency (NIMASA) are the two leading security agencies with a mandate to police the nation’s waters.

Rogo said it was a crime to carry out oil and gas activities within the nation’s maritime environment without approval from the Navy and relevant government agencies.

The Naval commander expressed optimism that the arrest and prosecution of the suspects in court would serve as a deterrent to criminals on the waterways.

Receiving the suspects and vessel, Mr. Abdullahi Umar, Assistant Commandant of NSCDC in Rivers, lauded the Navy for the collaboration that exists between the two security agencies at the state level. Umar promised that the suspects would have their day in court.

“We will immediately launch a credible investigation for possible prosecution of the suspects and any other culprits involved with the case,” he assured.

The official said the corps had secured several convictions of suspects in court with many serving different jail terms.