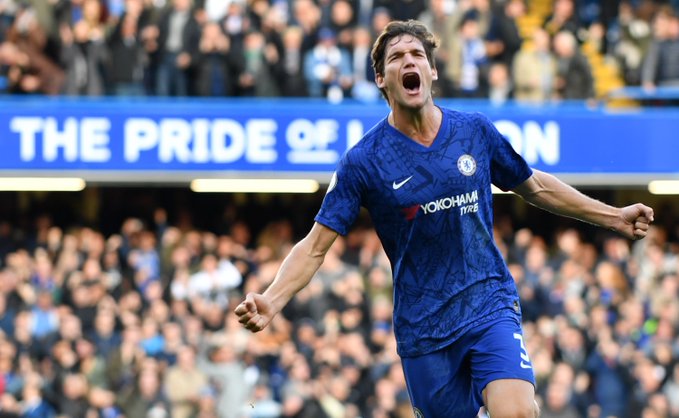 Marcos Alonso celebrating his first goal of the season against Newcastle.

It is five wins in a row for Chelsea with Marcos Alonso’s first goal of the season-ending Newcastle’s resistance which had held out until the final 20 minutes at Stamford Bridge.

After a first-half lacking in major incident to the degree that the referee being struck in the face and falling over was one of the high points for the crowd, Chelsea stepped up to play a couple of gears after half-time.

Chelsea’s second-half performance deserved all three points, having overcome a Newcastle side which had made it tough by keeping plenty of players behind the ball and denying the Blues much space.

Willian had gone close with a header and Mason Mount had a good shot saved before the interval but it was in the second half that Chelsea stretched the Geordies and managed to get Tammy Abraham into the game.

Abraham was not able to hit the target today although he did strike the crossbar and went close with another couple of efforts.

There were just under 20 minutes left to play when Hudson-Odoi knocked a pass out square to Alonso just inside the area and the Spaniard struck his shot low and true. The keeper got fingers to the ball but there was no stopping it hitting the net.

After Alonso had scored with a firm low shot, substitute Christian Pulisic was denied by a high-class save from Martin Dubravka who was busy in the second half.

In contrast, Kepa was only given work to do after Newcastle had gone behind and he collected his second clean sheet of the season.

Frank Lampard made only one change to his line-up from the team that started at Southampton a distant two weeks ago and that was enforced by N’Golo Kante’s injury while away on international duty. Ross Barkley came in.

There was no surprise to see Newcastle unchanged, the Magpies having managed a big win against Manchester United last time out.

They started this game pretty well too, certainly the equal of Chelsea when it came to putting the opponent under pressure in the early stages.

Though keeping plenty of players back throughout, especially when Chelsea had the ball, Steve Bruce’s side did look swift on the counter-attack and it needed Kurt Zouma to slide in to break up a speedy breakaway. An appreciative chant of the Zouma name was the thanks from the Stamford Bridge crowd.