Nigerian dwarf goat hits US headline for having rare quintuplets 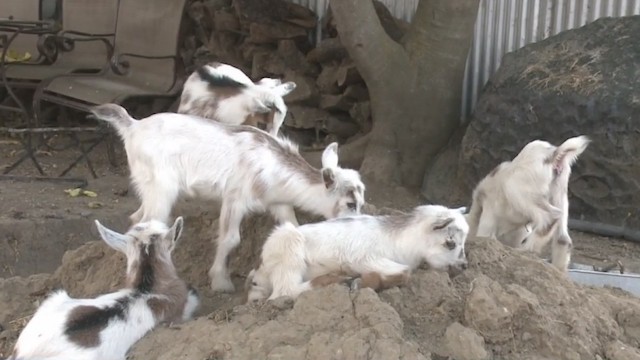 A Nigerian dwarf goat has drawn unusual media attention to itself in the United States by having quintuplets, that came as a huge surprise to the owner, Anita Varga, a farmer near Woodland, Sacramento.

Anita thought her pregnant pet goat Boozie looked a little on the heavy side, so she got an ultrasound.

“I thought she had four babies,” Varga said in a report by CBS13

That’s pretty unusual. Most goats only have two or three kids per litter. It took about an hour for all four to come out during birth earlier this month.

“And then I thought ‘hmm, let’s check,’ and I went back in and yes, there was number five, which was a big surprise,” she said.

It’s something so rare that Varga, who is a veterinarian, has never seen it before.

“I really didn’t have time to think about that, that came later where I was like, ‘ohh we had five,’” she said.

With that many babies, there could be some complications.

“It’s milk supply you have to watch, so you have to feed your goat, the mama, appropriately that she has enough milk,” Varga said.

And, because goats only have two teats, it gets a little complicated for the babies.

“I think everyone gets a turn, I didn’t see anyone not being able to nurse,” Varga said.

The quintuplets, three girls and two boys, seem to be doing just fine.

“They’re super cute and super active and so that’s another indicator that they’re really healthy,” she said.

Goats like these are valued for their milk and there’s also a growing demand for them as pets.

“The Nigerian dwarfs are a nice size, they’re friendly goats, they are very appealing to people,” Varga said.

So for now, Boozie will focus on being a good mom, not knowing just how out of the ordinary her five healthy babies have become.

“Boozie — she loves them all, she takes care of all five of them. I don’t know how she does it,” Varga said.

The five kids will remain with their mom for the next nine weeks while they nurse and put on weight. Eventually, they will be put up for sale.