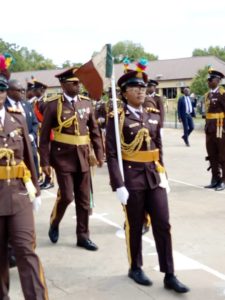 Parade at the Graduation in Kano.

The Nigeria Immigration Service (NIS) has graduated 462 officers of the 2nd Conversion and Upgrading Course at the Immigration Training School, Kano, Kano State.

The Comptroller General, Mr Muhammad Babandede, disclosed this in a statement signed by the Public Relations Officer, NIS, Mr Sunday James, on Saturday in Abuja.

Babandede urged the convertees and upgraded officers to cherish their new ranks by aligning with the commitment and dedication to duty of the superintendent cadre of officers.

He enjoined them to avoid anything that might tarnished the image of the service and be good ambassadors as the first beneficiaries of the newly drafted Immigration Manual used in teaching them during the course.

The comptroller general however, warned them against lobbying for posting or seeking favour in deployment.

The Commandant of the training school, Mr Ismail Hamis, thanked the comptroller general for his immense support and commitment to training and re-training in the service.

Hamis enjoined the graduands to justify the training they received by ensuring service delivery wherever they were posted.

He also appreciated the sister agencies for mutual collaboration since he assumed duty at the training school.

The event was witnessed by heads of military, paramilitary, security, and response agencies in Kano as well as representatives of traditional and religious bodies and friends of the service in the ancient city of Kano.