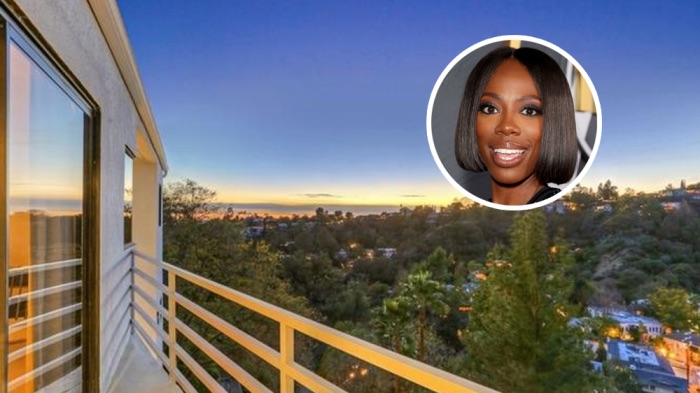 Yvonne Orji(inset) and her new home in Los Angeles

Nigerian-born Hollywood star, Yvonne Orji, who co-stars with Issa Rae on the HBO breakout hit “Insecure,” has reportedly splashed more than $1.8m for a light and bright modern home in L.A.’s celeb-soaked Beachwood Canyon, just a healthy hike away from the Hollywood sign.

According to Variety.com, Yvonne appeared to fall in love with the house that she even paid an extra $94,000 more than the asking price, to elbow out other interested buyers.

The house, originally built in 1991, sports a funky façade with an irregular roofline, a sage green paintjob, and an attached two-car garage that — along with the front door — is painted a matte bronzed red for contrast.

Variety.com reported that the front door opens to a brief landing with a vaulted ceiling and poofy chandelier before a stairway leading down to the multi-level public rooms. There’s a long hallway that’s been outfitted as a uniquely-styled office with hillside views and custom cabinetry, and a combination family/dining room space with high ceilings, blonde-hued hardwood floors and glass sliders leading to a balcony. The adjacent kitchen is rather narrow but upgraded with bar-style seating, a backsplash of white-painted brick and full array of stainless appliances.

There are three bedrooms in the nearly 3,500 sq. ft. structure; the loft-like master suite is kitted out with a balcony and a bathroom that — for better or worse — looks like an early ’90s time capsule. The two guest bedrooms are spacious and both also include direct access to outdoor balconies.

Ikem Chukumerije of Westside Premier Estates represented Orji in the purchase of the house.

She was born on 2nd December 1983 in Port Harcourt, Rivers State, Nigeria, and grew up in Maryland, US.

She has a master’s degree in public health at George Washington University. Orji’s parents expected her to become a doctor, lawyer, pharmacist, or engineer.

However, she was inspired to do comedy as a graduate student when she performed stand-up in the talent portion of a beauty pageant.

After graduate school, Orji moved to New York City to pursue a career in comedy. She is best known for her role as Molly in the HBO series Insecure.

She is single, having broken up with her Nigerian boyfriend Emmanuel Acho in August.