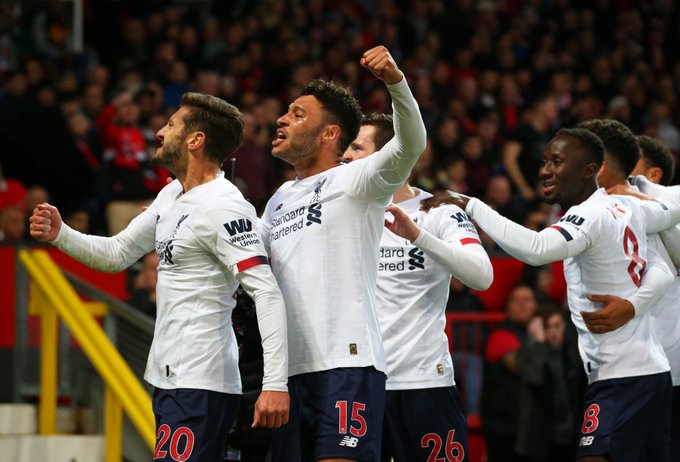 VAR made the headlines again as Marcus Rashford’s controversial strike looked to have handed Man Utd a crucial win, before Lallana struck in the 85th minute.

Having won just twice since the opening day of the season, Ole Gunnar Solskjaer knew he was under pressure to deliver a result that could send the fans home happy.

The Norwegian unveiled a 5-3-2 formation, with Rashford and Daniel James deployed as wide forwards. The return of David De Gea provided a massive boost, while Mohamed Salah’s absence would have surely rocked Liverpool’s preparations.

Perhaps buoyed by the occasion and the crowd, United came storming out of the blocks with Aaron Wan-Bissaka and Andreas Pereira particularly keen to impress.

Liverpool, meanwhile, were struggling to put together the kind of football that had seen them win 17 league games on the trot.

It wasn’t until just after half-hour mark before we saw the first chance of the game. Mane broke down the right and cut it back to Firmino, who should have done a lot better with his first-time effort.

VAR had been involved in deciding three other matches on the weekend and it proved to have a huge hand in this one too.

Victor Lindelof appeared to foul Divock Origi in the build-up but play carried on and when James sped down the right, the Welsh winger whipped in a fine cross to Rashford, who finished with aplomb.

The entire Liverpool team pleaded with Martin Atkinson, but with many expecting the goal to be disallowed, the cheer from the home crowd said it all. Goal allowed.

Liverpool manager Jurgen Klopp was absolutely furious, complaining with the fourth official on the touchline. But the German’s words weren’t going to change anything – VAR had ruled once again.

Perhaps spurred on by the sense of injustice, Liverpool worked hard to find an equaliser and thought they got their wish on the stroke of half time. A long ball forward found Mane, who shrugged off Lindelof and finished beyond De Gea.

After the break, Solskjaer’s side kept their 5-3-2 shape and continued to frustrate the league leaders. Those waiting for a resurgence from the Reds were left disappointed, as Mane and Firmino failed to find inspiration with Klopp as ever an animated figure on the touchline.

The German sent on Adam Lallana and Alex Oxlade-Chamerlain for some more creativity, however Lallana find the net with just 4 minutes left to salvage a point for the league leaders.