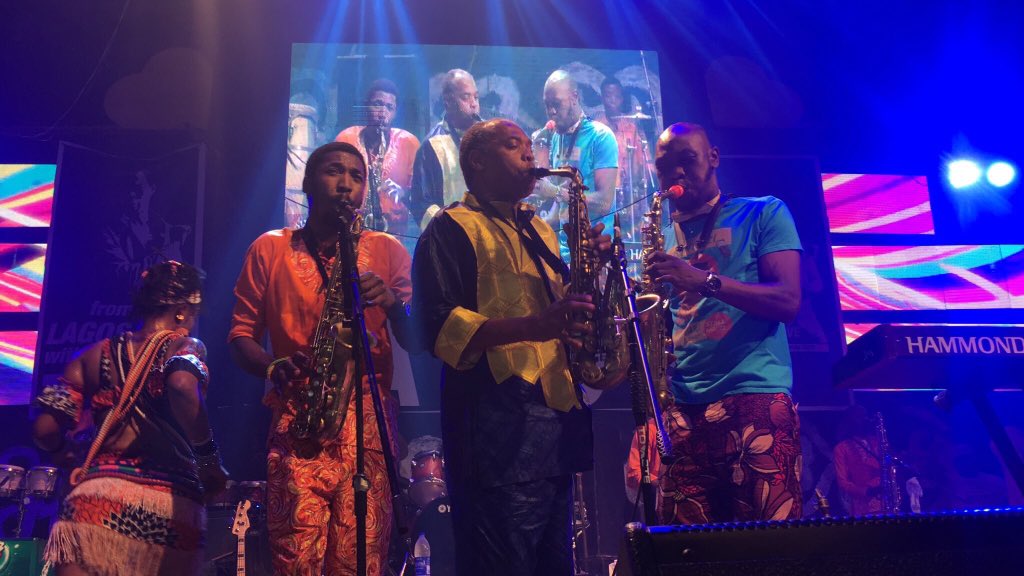 The trio’s energetic performance on Sunday, October 20, 2019, wrapped up the 2019 edition of Felabration which kick-started on a good note on 14 October 2019 at New Afrika Shrine, Ikeja, Lagos.

This year Felabration’s concert which ran under the theme ‘From Lagos With Love’, a non-stop party’ that celebrates the life and legacy of Afro-beat legend, Fela Anikulapo-Kuti, championed by Yeni Kuti.

The one week concert was full of exciting performances from musicians representing a variety of genres from 14th to 20th of October.

Earlier on Friday, October 19, 2019, Seun Kuti, the youngest son of legendary Fela Anikulapo Kuti, pulled off an electrifying performance with his band, Egypt 80 and kept the energy on up to mark the sixth day of the concert.

During the grand finale, Femi thrilled fans with sax and piano alongside Positive Force Band where his son Imade Kuti plays sax, dishing out several tracks from his musical works leaving the crowd high on a full dose of his Afrobeat music.

The energetic performance of the duo moved Seun Kuti who joined them in playing the saxophones. It was an iconic moment as they got the teaming crowd applauding them as they battle with instruments.

This year’s edition witnessed performances from some of the most talented Nigerian artistes with Afrobeat sensation and BET 2019 Best International Act winner, Damini Ebunoluwa Ogulu, popularly known as Burna Boy as the headliner.

Speaking on this year’s theme, Yeni Kuti, organiser of Felabration and the eldest daughter of the late Fela said, “We used Fela’s track, Eko Ile. You know, we are trying to draw people to Nigeria, tourists to Lagos, Abeokuta and that is how the theme came about. All of us that are in the Felabration committee, none of us lives abroad, we all live in Nigeria and nobody really wants to go and live abroad. You know that Fela’s song? Kosibiti mole gborile, kosi oo a fi eko Ile (There is nowhere I can put my head but Lagos). That is what inspired the theme.