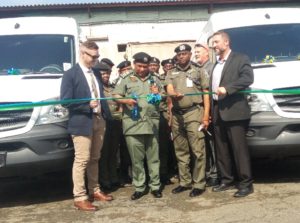 CP Maikudi Shehu, Commissioner of Police in charge of Explosive Ordnance Disposal (EOD), disclosed this on Monday during the one-week training and unveiling of the Mobile Radiation Detection Systems in Lagos.

Shehu said that the training came at the right time in efforts to curtail the menace of terrorism, security threat and other dastardly acts bedeviling the country.

“The menace of insecurity calls for a new approach that will be founded on credible intelligence gathering, acquisition of modern technology, capacity building, and inter-agency collaboration.

“This will enable law enforcement agencies to be pro-active and able to predict potential crimes rather than being reactive.

“Therefore, I urge all participants to ensure effective use of this equipment and utilise the knowledge that will be acquired from this important training to enhance our national nuclear security,” Shehu said.

Also, the Police Public Relations Officer (PPRO) EOD Command, DSP Gbolahun Moronfolu, said that the department was established out of the need to have a dedicated section to handle CBRN related matters, to monitor the movement and supervision of related substances.

“CBRN is weaponised and non-weaponised chemical, biological and nuclear materials that are capable of causing great harm and pose significant threats in the hands of terrorists.

“Terrorists can potentially incorporate CBRN materials into Improvised Explosive Device (IED) components through Radiological Exposure Devices (RED). Apart from malicious use, CBRN accidents can also occur in the course of usage and transportation. Mass casualties and long term effects are likely consequences from both instances,” he said.

The PPRO said that the possibility of terrorists gaining access to nuclear and radiological materials was a significant threat to humanity and international peace and security.

“To combat these threats, the country has been strengthened for better service delivery,” he said.

The DSP said that the training programme and the unveiling of the mobile detection system and its apparatus is a step in the right direction at advancing EOD/CBRN to a greater height of service delivery.

Shulman said that his organisation was here to form a long-lasting partnership with the Nigeria EOD and NPF in a bid to eradicate the menace of terrorism in both countries and the world in general.

“We hope to continue the partnership not with just these two vans but with additional equipment, additional training, and further cooperation. We will begin with the operation training and in future move onto maintenance training that will allow the officers to be able to do the maintenance on the equipment themselves.

“We are not just providing the equipment, but also the expertise to maintain the equipment and then the sustainability to ensure that the vans continue to function long into the future,” Shulman said.

Tags:   US Department of Energy