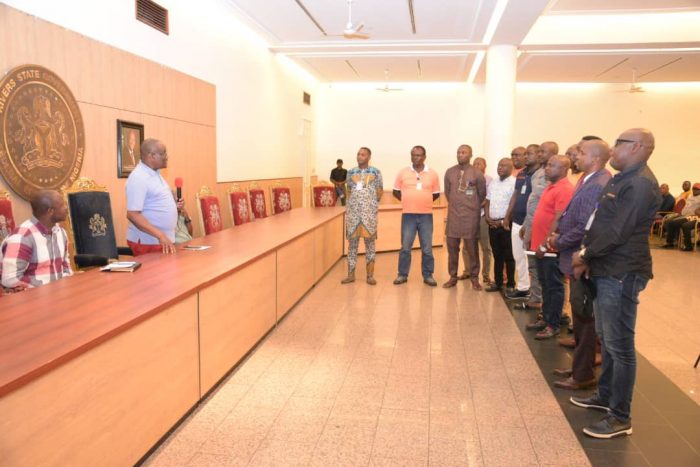 Rivers State Governor, Nyesom Wike has threatened to sack the Task Force on Street Trading, Illegal Markets and Motor Parks if the report about extortion and compromise against members continues.

Addressing members of the Task Force at the Government House, Port Harcourt on Sunday Evening, Wike regretted that the operatives have compromised in some locations, negatively affecting their performance.

He said that the Task Force, through reduced performance has allowed street traders to return to Mile One, Air Force Junction, Rumuokoro and Agip areas of the state capital. He however praised the team operating in Garrison.

He said: “If the productivity of the Task Force continues to go down by tomorrow, I will dissolve the Task Force. We will not tolerate a situation where the progress we have made is reversed.”

Wike warned the operatives against acts of extortion , saying that they must focus on their official responsibility.

He said: “All acts of extortion must stop forthwith. Any operative found wanting in this regard will be sanctioned. There is no reason why you should receive bribes from defaulters.”

The Governor said that leaders of non-performing zones must rise up and work hard to ensure that the streets are free from illegal traders and motor Parks.

He warned members of the public against physically assaulting operatives of the Task Force. He noted that going forward, the State Government will take measures to protect the operatives from criminal elements.

“From now on, we will change our strategy. We are going to activate communication outlets for immediate response whenever criminal elements attack the operatives. Security operatives will be on ground for rescue operations when the need arises.

“We must show that we are ready to protect the operatives at all times. We are determined to clean up our streets, stop illegal trading and improve all round security,” he said.

Wike said that the Task Force started excellently, noting that they should not allow themselves to end badly. He said that if this set fails, they would be shown the way out.

He wondered why operatives would be complaining about their monthly allowances when they earn more than some civil servants. He urged them to see their appointments as a privilege to serve the state and build their future.

The Governor said it was the same way that some members of the State Executive Council complained that they were not getting anything from the administration, but they are now lobbying extensively to return to Government.

He informed that an additional 200 operatives will have their biometrics captured on Monday to strengthen the capacity of the Task Force.

Wike said that his commitment to return Port Harcourt to its Garden City status will not be compromised on any account. He reiterated that Rivers interest is his priority.