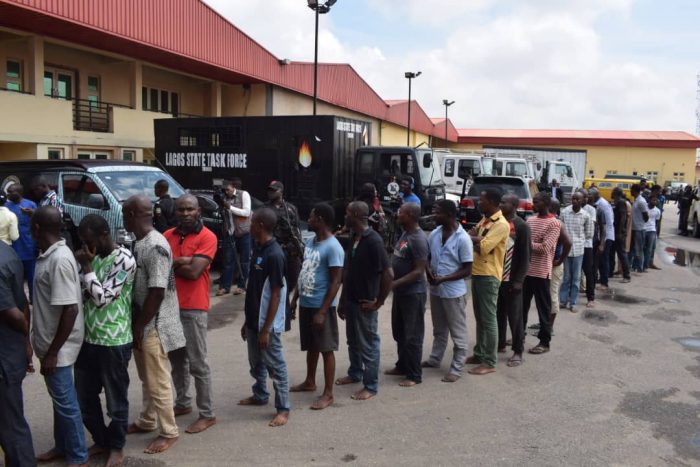 Lagos State Attorney General and Commissioner for Justice, Mr. Moyosore Onigbanjo had led the prosecution of 37 traffic offenders in court.

The attorney-general, during the proceedings for written address, urged the court’s presiding Magistrate, Omobola Salawu to convict the defendants as charged.

He added that the 37 offenders were charged with offences of driving against traffic, illegal driving on BRT corridor and illegal plying of highway with motorcycles which are likely to endanger the lives of road users.

Onigbanjo noted that the offence committed was punishable under section 66 (b) of Lagos State Transport Law, 2012.

The presiding Magistrate, Magistrate Tombola Salawu admitted them to 100 hours community service and fines of N15,000 and 20,000 varying from the offence committed.

The magistrate ordered that they all dropped two passport photographs and pay the fines allotted into the Lagos State Mobile Court’s account.

While addressing newsmen, Onigbanjo stated that the state would continue to prosecute traffic offenders until sanity was restored back on Lagos roads and law-abiding citizens allowed to enjoy the roads without being assaulted by defaulters.

“Governor Sanwo Olu led administration has zero tolerance for disobedience to traffic rules, all traffic offenders would be made to serve the punishment immediately, which could be in form of compulsory community service or fines as appropriate,” he said.

Onigbanjo further said that many convictions had been handed out and that vehicles of some of the offenders had been forfeited.

Likewise, the Chairman Lagos State Taskforce, CSP Olayinka Egbeyemi, disclosed that about 4,477 motorcycles and 18 vehicles had been impounded in the last six months for traffic offences.

He said that the state taskforce would continue to apprehend offenders of the State traffic rules and regulations.